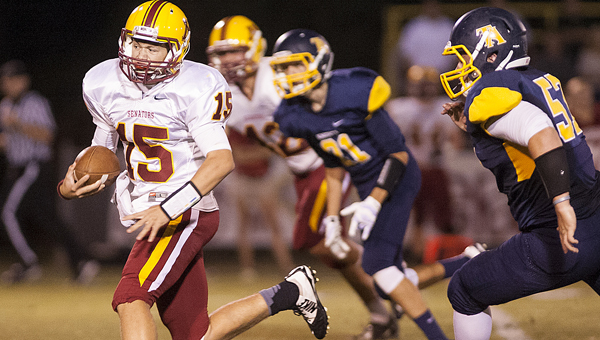 TUSCALOOSA — Tuscaloosa Academy was locked in a tight battle early, but two fumble recoveries on errant snaps late in the second quarter catapulted the Knights to a 42-14 victory over Morgan Academy on Friday night.

The Knights led 12-0 late in the second quarter, but Robins Bonner recovered a snap that sailed over the Morgan Academy punters’ head and into the end zone to put Tuscaloosa Academy up 19-0.

The same thing happened again later in the second quarter when the ball sailed over the Senators’ punter and the Knights recovered at the 9-yard line. Yunus Eksin knocked home a 25-yard field goal.

“We were very fortunate,” Tuscaloosa Academy coach Robert Johnson said. “They made a couple of miscues and we took advantage. I am proud of our guys and their effort. I think in the second half we improved as a football team and hopefully we can build on that.”

Keonte Chambers found Trayshon Foster for a 67-yard touchdown on a third-and-24 to get the scoring started. Chambers then scampered in from 1 yard out to give the Knights that 12-0 lead.

Morgan Academy took the second-half kickoff and drove down the field. However, Foster came off the edge and blocked the field goal attempt by the Senators.

Two plays later, Chambers connected with Foster again on a 68-yard touchdown pass. Foster not only caught two touchdown passes, but he also blocked a field goal and an extra point.

Junior running back Markell Speights was taken out early in the game after a fumble. But, he was able to get a little redemption. After the Senators finally got on the scoreboard, it was Speights time. He carried the ball seven times for 38 yards and a touchdown on the next possession. Then he added 44 more yards on the next possession.

“He really carried the ball well in the second half and I am really proud of him. The line did a good job of blocking and he was really good at reading the blocks and finding the holes,” Johnson said.

Joshua Lanier and Dylan Powell both had interceptions for the Knights. Timmy Rice added a fumble recovery. Morgan Academy will play at Autagua Academy next week. Tuscaloosa will face Bessemer Academy.