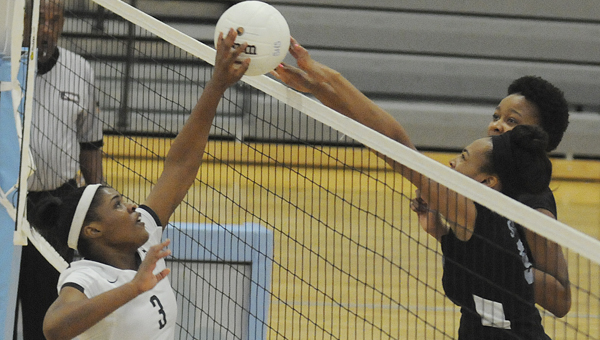 Selma was one victory away from sweeping the varsity and junior varsity titles at the Selma High School Invitational Tournament Saturday, but an old area foe had other plans.

Demopolis defeated Selma 25-19, 25-21 to win the varsity championship Saturday, stealing the title after the Saints were unable to overcome a handful of costly mistakes.

“We had a lot of errors,” Selma head coach Melissa White said. “We weren’t able to capitalize off of their errors so that killed us. We didn’t talk and we didn’t move to the ball and we didn’t cover. We didn’t play our style game and in the end it cost us.”

Last year the two teams were in the same area in Class 5A, but the AHSAA’s updated realignment has  changed that. Now, they just play as non-area opponents. Both matchups this year have resulted in Tigers’ wins.

“It gives our girls a lot of confidence for this year,” Demopolis head coach Angela Sanders said. “We know how well we can do now.”

“[The difference] was who wanted it more,” Sanders said. “We found it inside us and we found a heart for the game now. At the beginning of the game of year I wasn’t sure if it was there, but I can see now these girls have a passion for the game and they are having fun on the court finally.”

“Our adrenaline should have been higher based on the JV team winning,” White said. “Personally I feel like they weren’t hungry enough. They wanted it but it’s easier to talk about it than be about it.”

Dallas County finished third in the varsity tournament after losing to Selma in the semifinals earlier in the day. The Saints won that match 25-23, 25-19 over the Hornets.

“Our communication broke down and that’s where the errors began, where there was no communication,” Dallas County head coach Linda Moore of her team’s loss to Selma.

The Saints’ varsity still came up short, but the Selma JV did not. The JV Saints defeated Billingsley in two sets to win the tournament.

“It’s very big for them,” White said of the JV. “They are still learning the game so it was kind of like on impulse, but coming from last year and not having a JV in it and coming back to win it, that’s encouraging and it shows a lot of growth.”