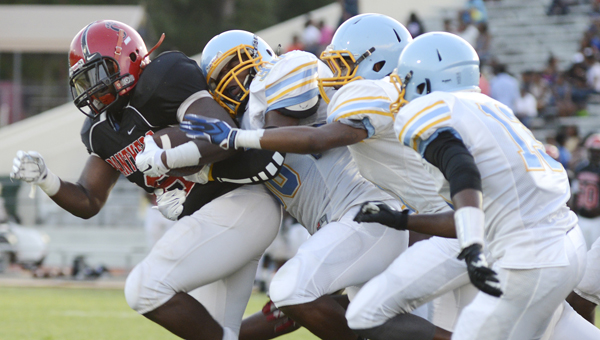 Selma’s defense was shredded last week against McAdory, but the Saints will look to get back on track this week when they face county rival Keith. After winning its first three games of the year, Selma has lost its last two games to Hillcrest-Tuscaloosa and McAdory. Keith is winless this season. — File Photo

Going into Friday night’s Keith-Selma game at Memorial Stadium, one thing is clear — the Bears and Saints both badly need a win.

Keith (0-4) will looking to avoid its first 0-5 start since the 2004 season. The Saints (3-2) aren’t winless, but they are reeling after a last second, heartbreaking loss to Hillcrest-Tuscaloosa two weeks ago and a thumping on the road at McAdory last week.

“We need a win to put things behind us from the previous weesk,” said Selma head coach Leroy Miles. “With all the things we had going on in the program from kids being suspended to kids being injured, we need to get these weeks behind us and get back on a winning streak if we can.”

With only four games remaining after the Keith game, Miles sees this as a turning point in Selma’s season.

After all, it was only one year ago that Selma won its last four regular season games to make the postseason.

“It is definitely the turning point of the season,” Miles said. “If we can’t get back on a winning track now, then it’s going to be tough to close this year out.”

On the other hand, Keith would like a win of any kind right now. The Bears have struggled to score, totaling only 44 points in four games and have been unable to stop anyone. Keith has given up over 38 points in every game this season.

“That’s been the biggest thing for us to overcome. We’ve had to play some people that aren’t necessarily linebackers and move them around and that has weakened us in other areas.”

It’s been an unusual start for a Bears’ program that has made the playoffs six consecutive years. As a non-region matchup between a 1A and a 6A school, Friday’s game carries no playoff implications, but don’t tell Crum it doesn’t mean anything to his program.

Not only does Friday signify a chance to get the season moving in the right direction, but it also gives Keith a chance for its second win all-time against Selma — according to the Alabama High School Football Historical Society website.

“We have been competitive with them in the past in preseason games where we played for a half or in a shortened game,” Crum said. “I know it’s going to be tough and I know we are going to have a big hill to climb.”

Southside (2-3) gets to take a break outside of Class 4A, Region 1 play Friday after a tough loss at No. 4 Thomasville last week. The Panthers will face 5A Wilcox Central (0-4), who is winless on the year and likely comes in hungry to turn around a season that has seen the team score only 14 points.

SERIES HISTORY: Southside and Wilcox Central have not played since 2001 and Panthers fans have probably blocked out all memories of the last game between the two teams. Wilcox Central won that meeting 58-0.

WHAT TO WATCH: Southside’s two wins this year have come against currently winless teams in Keith and Monroe County, who are a combined 0-8 on the season. Wilcox Central is also winless, and like the Bears and Tigers have struggled to find consistency on offense. Southside’s three losses are to teams with a combined 11-3 record.

Dallas County (1-3) ended an eight game losing streak that dated back to last year with a 35-18 victory over Sumter Central Friday night. The Hornets’ opponent Friday, Bibb County, is coming off of a defeat to West Blocton — the first loss the Choctaws have had to their county rivals since the 1970’s.

WHAT TO WATCH: Like most of Friday’s games around the state, as a non-region matchup this game will have no impact on the postseason, but it could be the continuation of some positive momentum for the Hornets. Dallas County will need to be playing well when it steps back into region play against Central-Tuscaloosa next week, a team it trails in the standings in its chase to get into the playoffs.

Outside of a game it had to forfeit, Ellwood Christian (3-1) continues to be unbeaten on the year. The Eagles rallied past Keith for a blowout road win last week, but will face one of its stiffest challenges of the season Friday when it takes on Verbena (2-2), a team that has been competitive in every game this year. The Red Devils have wins over Thorsby and Autaugaville.

SERIES HISTORY: This will be the first meeting between the two schools.

WHAT TO WATCH: Ellwood has trailed at halftime in wins over Francis Marion and Keith, but came scorching out of the break for big wins. Friday the Eagles would be wise to try to make things a touch easier by racing out to a lead.

The schedule technically gets easier this week for Morgan Academy, (0-4) although far from easy. The Senators saw one of the state’s greatest dynasties up close last week when they fell to Edgewood Academy, who extended its winning streak to 49 games. Morgan Academy travels to Tuscaloosa Academy this week, its fourth road game of the year in five weeks. The Knights (3-1) only loss came to No. 5 Restoration Academy.

WHAT TO WATCH: Morgan Academy has had a rough schedule early on in the year. The Senators opponents have a combined record of 15-3 and three of their four games have been on the road. Morgan will be on the road again Friday and will try to find some offense. The Senators are averaging 12 points per game thus far this year.

Meadowview Christian (2-2) will look to bounce back from a 56-22 to Victory Christian last Friday against North River Christian (1-3). North River is coming off of a 33-28 loss to Calhoun Academy last week.