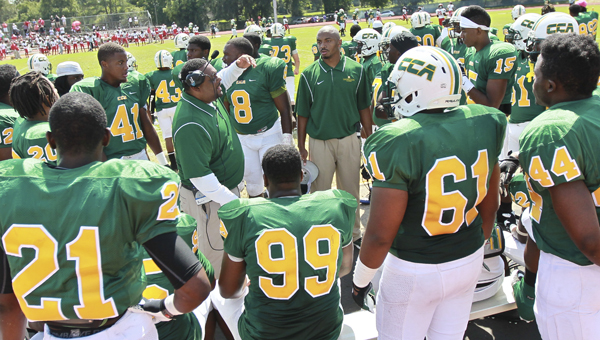 Hornets’ defensive gameplan on the sideline during their game against the Southeastern. –Alaina Denean

Concordia College Alabama had shown improvement in its first two games of the year, but the Hornets just didn’t look like themselves in the second half Saturday afternoon against Southeastern University.

Looking back, there was a good reason.

Hornets’ head coach Stanley Conner left the game by ambulance at halftime, and it was later learned that he suffered a heart attack, according to school officials. Conner is now at home and resting, but at halftime, his players weren’t sure of his status and it showed in the second half.

“Everything that could go wrong, went wrong,” said Michael Fantroy, who will fill in as interim head coach in Conner’s absence. “A lot of that happened in the second half.”

Concordia (1-2) lost the game 59-16 and the second half was a big reason why. The Hornets were outscored 35-7 in the third and fourth quarters, with 21 of Southeastern’s points coming on Concordia turnovers returned for touchdowns.

“We shot ourselves in the foot a lot,” Fantroy said. “Southeastern is a good football team, well coached and fundamentally sound but we had opportunities and didn’t capitalize on them.”

The Hornets turned the ball over six times in all, with three lost fumbles and three interceptions. Each Concordia quarterback that played — Aaron Pierce, Horatio Keller and Jarva Brewer — all threw an interception.

“It is hard to overcome a lot of turnovers so that is what we are working on this week — fundamentals and getting back to the basics of fundamentals,” Fantroy said.

Southeastern (2-1) led 14-0 when Concordia caught its first break of the game. The Fire were tackled into the end zone for a safety to get the Hornets on the board.

The game remained tied until 4:54 was remaining in the second quarter. Keller was intercepted by Southeastern’s Quentin Harris, who ran it back 8 yards for a touchdown to make it 21-2 Fire. Concordia answered with a 3-yard touchdown run by Pierce with 3:51 remaining in the first half. Will May added a 30-yard field goal before halftime to give Southeastern a 24-9 lead at the break.

Jonathan Pearce threw a 9-yard touchdown strike to Steven Williams to make it 31-9 and Concordia answered on a Pierce 10-yard run with 10:20 left in the third quarter.

Unfortunately for the Hornets, that was their last score of the day.

Southeastern scored the game’s next three touchdowns, with all of them coming in the game’s last seven minutes.

Concordia actually outgained Southeastern 356 to 346 in the game, but turnovers were too much to overcome. The Fire did not turn the ball over one time in Saturday’s game.

Both teams managed 21 first downs and Concordia controlled the time of possession by holding the ball for 32:22.

Matt Rowser led Concordia with 14 rushes for 32 yards, while Pierce managed 32 yards on 10 carries. Pierce was also the most affective Concordia passer, completing 6 of 13 passes for 106 yards.

Conner was released from Vaughan Medical Regional Hospital Monday morning and is expected to miss the next three to four weeks.

The Hornets will hit the road Saturday against West Alabama after playing their last two games at home.