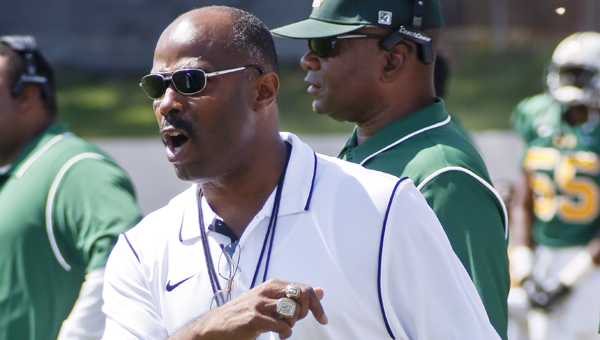 The Hornets lost the game 59-16, but that hardly seemed to matter after Conner left at halftime knowing something just didn’t feel right.

“He felt different at halftime and a little nausea and wanted assistance,” said Concordia interim head football coach Michael Fantroy. “We got assistance for him but at that time we didn’t know what the problem was. He just knew from past experience that something wasn’t right and we alerted the medical staff and they came together and made the assessment and took him to the hospital. After the game when I made it to the hospital, I found out that he had a heart attack.”

“I was there last night and he was resting well,” Peoples said. “Due to visitation rules and regulations, I had about 10 to 15 minutes to speak with him and we mainly talked about where to go from here, since he will not be able to be on the sidelines.”

Conner recommended Fantroy fill in as the interim head coach for the Hornets.

“Coach Fantroy and coach Conner go way back,” People said. “They go way back to their playing days and working together so the mindset on football is probably similar.”

Saturday was the second heart attack Conner has suffered during a football game, Fantroy said. The first was when he was coaching at Benedict College in November 2008.

“I visited with him during visiting hour in ICU yesterday and he was alert, and of course, watching NFL football,” Fantroy said. “He was a feeling a lot better. I think he was sore, but other than that he was fine.”

Peoples said Conner is expected to miss the next three to four weeks and that he will get a doctor’s clearance before getting back onto the sideline.

“Had he waited, it could have been fatal,” Fantroy said. “It’s good that he knew his body and knew the signs, so we just thank God he is alive. Football takes a backseat to your health and your life.”

Alabama’s Amari Cooper hauls in a touchdown pass in the first quarter of the Tide’s SEC game against Florida Saturday... read more