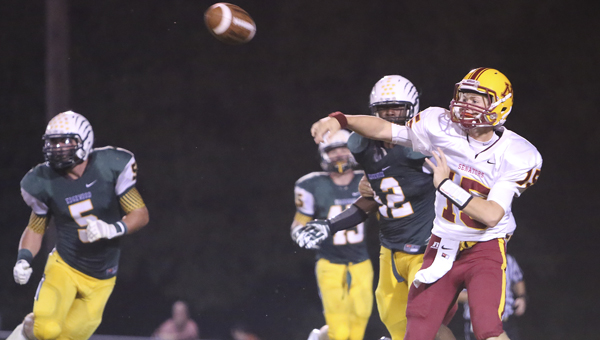 Edgewood Academy billed Morgan Academy for a 55-point shellacking in the 69-14 win Friday at Charles P. Storrs Field for its 49th consecutive victory.

The Wildcats (4-0) wasted no time, scoring eight touchdowns on its first 13 plays on offense in the first half.

With a balanced attack, Edgewood recorded four scores through the air and four on the ground.

On the first play from scrimmage, senior quarterback Ryan Bottoms hit senior wide receiver Tyler Mathews on a post pattern for a 66-yard touchdown. Jon Johnson added the point after to give the Wildcats a 7-0 advantage just 16 seconds into the contest.

Bottoms added two more passing scores on Edgewood’s next two drives, feeding the ball on a screen pass to senior running back and Vanderbilt University commit Josh Crawford, who took it 83 yards to the end zone to cap a two-play drive.

On the first play of the Wildcats’ next series, Crawford turned a shuffle pass from Bottoms into a 64-yard touchdown, as Edgewood led 21-0 with 3:45 remaining in the first quarter.

“It was phenomenal. I didn’t get hit at all,” Bottoms said. “They were just fantastic opening up holes in the run game and protecting me in the passing game.”

“Our O-line don’t get the credit they deserve,” Carr added. “Our offensive line, they probably worked as hard as any group because that was a question mark in the spring. But they worked harder than any group at getting better, doing what it takes in the summer to get to this point. Much improved, I’m really proud of those guys and hopefully they’ll continue to do great things.”

With 2:40 left in the first, junior defensive lineman Tega Junior recovered a fumble on Morgan’s 26. Two plays later, Crawford called his own number on a read option and scored from seven yards out to put Edgewood up 28-0.

Crawford cashed in another Morgan turnover, a fumble recovered by the ‘Cats, for a 60-yard rushing score on his team’s second play of its next drive. Johnson missed the extra point as EA’s lead rested at 34-0 with 11:19 left in the half.

Edgewood senior running back Herman McKenzie recorded his team’s next three touchdowns to close out the first half, two rushing and one receiving. McKenzie scored on a 27-yard run, a 31-yard screen pass from Bottoms and a 21-yard run to extend the Wildcats’ lead to 55-0 at the break.

“Obviously, our confidence is up, our offense has been clicking all year just like that. The biggest challenge for me is to keep our guys grounded, humble and continue to work hard,” Carr said. “And I know they will. Their attitude is the little ‘E’ on the front of the jersey is more important than the last name on the back.

Morgan Academy will play at Tuscaloosa Academy next week.