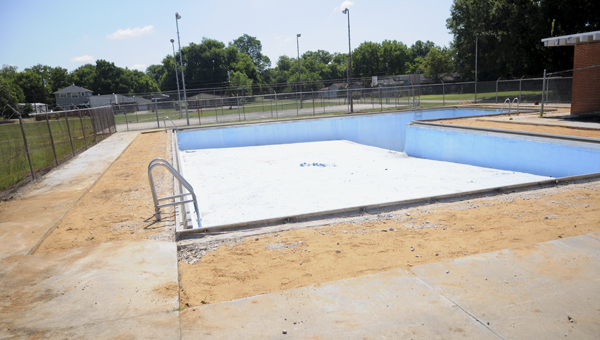 This is a photo of the Dinkins Pool during renovation work in July. Phase one of the project was recently completed.–File Photo

This is a photo of the Dinkins Pool during renovation work in July. Phase one of the project was recently completed.–File Photo

More work will have to be completed at the Dinkins Pool before it reopens next spring, after vandals broke in and damaged the showerheads last week.

Elton Reece, director of the Selma Parks and Recreation Department, said last week that city workers started filling the pool to make sure motors still worked and to see if the pool held water without leaking. When they returned Friday to check the pool, they found a door ajar and damage to the facility’s showerheads.

“The water in the pool drew attention to the pool again,” Reece said. “… I don’t know what the fascination about the shower heads were, but they went in there and tore the heads off the showers.”

Reece estimated that there was around $500 dollars in plumbing damage.

“This is not going to continue,” Johnson said. “I’m going to make sure we put metal doors up. It’s something that should have been done before because it’s not the first time.”

Johnson said the funding needed to add the metal doors would likely be from a team of people, but a portion would likely come from oil lease money.

“That’s going to be done soon, real soon,” Johnson said. “We don’t need them to come back and finish what they started.”

Reece said he has not had a chance to speak with Johnson about adding metal doors, but that he would do whatever he could to help out. Once the pool is drained and ready for winter, Reece said the doors will likely be nailed shut until something is decided.

The pool was originally slated to open this summer, but will now not open until late spring or early summer 2015.

Even with the damage done, there was some progress made this week at the pool.

Reece said the pool’s four motors, which cost around $3,500 apiece, worked, which helped lighten the load on how much the final steps of the project will cost to complete. Reece said the pool also held water without issues.

Reece said the most extensive part of the renovation is complete with the pool collar replaced and the old diving boards taken out.

“We had to put a new collar around the pool so it wouldn’t be so rough on the kids feet,” Reece said. “After the years, the water has exposed the concrete. It was gone and rocks were sticking up.”

The entire cost of the renovation is still expected to be around $30,000, Johnson said.

The project is broken into multiple phases. The first phase, which included fixing broken concrete, is complete and the city is now working on phase two. The second phase includes the painting and adding park benches, which will not be done until next year.

The benches and paint have already been purchased, Reece said, which means there is not a lot of materials left to buy.

“With the new ropes and new ladders, I’m looking at around $2,000 to get it in Grade A working condition  — as long as the pool motors do not mess up,” Reece said.

Retailers have big plans for this year’s shopping season

Becky Youngblood sets out merchandise in a display at the downtown retail and clothing store Allez-Oup. Local retailers are already... read more