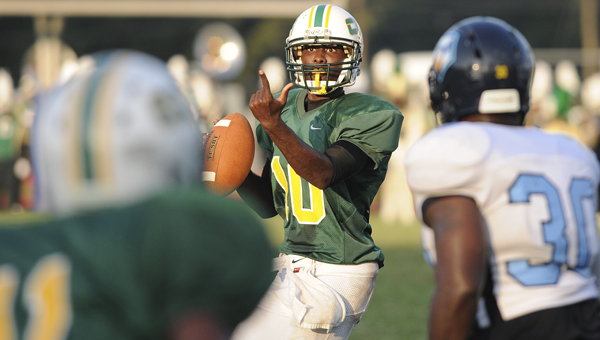 Concordia College Alabama quarterback Andre Millet points out directions to a teammate during Saturday’s game at Memorial Stadium against Point Universiy. The Hornets rallied from a 14-0 deficit with four consecutive touchdowns in the fourth quarter. –Daniel Evans

Concordia College Alabama scored four touchdowns in the fourth quarter to rally past Point University for a 27-14 win Saturday at Memorial Stadium.

The win was the first at Concordia for head coach Stanley Conner and the first for the Hornets in nearly a calendar year.

“We really needed a win,” Conner said. “This program needed a shot in the arm.”

The defense and special teams ignited the come-from-behind win with three game changing plays in the fourth quarter. With Point up 14-0 and seemingly in control, Concordia’s Johnathan Drake recovered a fumble at the Point 1-yard line to set up a Matthew Roswer touchdown run.

After a 71-yard touchdown throw from Haratio Keller to Dontae Parker tied the game at 14, Deon Johnson returned a Point punt 65-yards for a score to give Concordia its first lead of the day.

Just a few minutes later, with Point driving for a potential game-tying score, Drake intercepted a pass and ran it back 55 yards for a touchdown to put the game away.

“Early on the defense has to carry us,” Conner said. “Reserve the right to punt. That’s just basic fundamental football when you are trying to get something going offensively.”

It was a tale of two halves for Point.

In the first half, the Skyhawks moved the ball with ease. Jacorian Brazzell ran 61-yards for a touchdown with 7:28 left in the first quarter to open the scoring. Charles Fortis connected with Leroy Perry II on an 11-yard touchdown in the second quarter, giving Point a 14-0 advantage at the break.

The Skyhawks’ offense disappeared in the second half, unable to move the ball consistently against a Concordia defense that seemed to grow more confident as the game progressed.

“It was an embarrassing showing for us, especially our offense,” said Point head coach David Rocker. “We came out here and took a team lightly and this is what happens.”

The Point defense did its part, keeping Concordia’s offense in check most of the second half.

The Hornets drove the ball inside the Skyhawks’ 20-yard-line four times in the second half without scoring. On two of those occasions, quarterback Andre Millet was intercepted in the end zone.

The momentum changed when Concordia’s fourth straight trip into the red zone ended without points, but left Point starting a drive at its own 4-yard line.

Fortis fumbled on the next play and Drake fell on it to set the Hornets up with great field position.

Rowser did the rest, giving the Hornets their first points of the season with 14:43 left in the fourth quarter.

Point went three-and-out on its next possession.

Conner inserted Keller into the game at quarterback and he made an instant impact, finding a streaking Parker down the sideline for a tying score.

After the teams exchanged punts, Concordia sacked Fortis to force the Skyhawks to punt from inside their own 20-yard line.

Johnson caught the punt at his own 35 and ran it untouched down the home sideline to give the Hornets the lead, much to the delight of the home crowd at Memorial Stadium.

Drake intercepted Fortis with 2:01 left and ran it back for a touchdown.

The interception ended a drive that had potential, as Point had plenty of time to work with and had picked up 17 yards on its previous play.

Concordia will host Southeastern University next Saturday at 12 p.m.