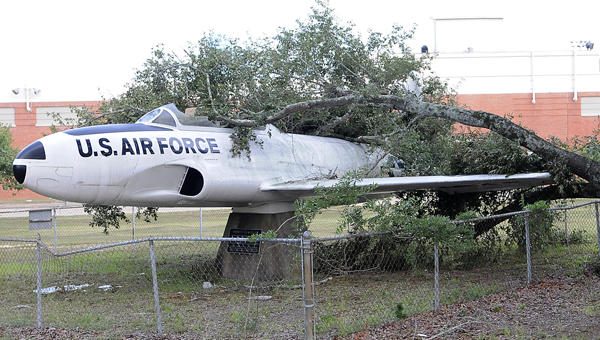 A tree limb lays across the T-33 positioned outside Selma’s Memorial Stadium Tuesday. City crews began removing the limb Tuesday afternoon, discovering significant damage to the plane’s cockpit. Selma’s Parks and Recreation Department paid for the plane to be refurbished in May 2011. — Daniel Evans

A T-33 plane, positioned in front of Selma’s Memorial Stadium, suffered significant damage Saturday when heavy rains and high winds caused a large tree limb to fall on the plane.

The extent of the damage and repair any costs are not yet known.

Elton Reece, director of the Selma Recreation Department, said the tree destroyed the plane’s cockpit canopy and caused other damage.

Crews with the city of Selma’s Public Works department worked to remove the limb Tuesday afternoon. The limb fell from a nearby oak tree.

The plane — which resembles the T-33 planes once used for training Craig Air Force Base — was renovated in May 2011.