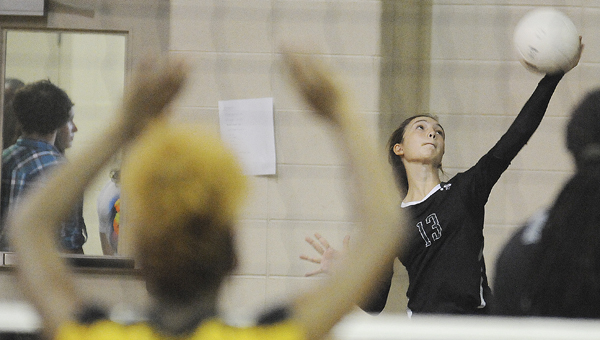 Dallas County’s Tori Hatfield serves Thursday during the Hornets’ 25-16, 25-12, 25-2 victory over Ellwood Christian. Hatfield and the Hornets opened their season with an in-school game at the school’s gymnasium. The match also served as Ellwood Chrisitan’s opening game of the year.–Daniel Evans

PLANTERSVILLE — After the departure of six seniors, the Dallas County volleyball team welcomed a lot of new faces onto the court Friday as the Lady Hornets opened up their season.

Dallas County rolled past Ellwood Christian 25-16, 25-12, 25-2 in its opening match of the season Thursday during an in-school game. It wasn’t pretty at times, as both teams had trouble consistently serving the ball over the net, but Dallas County head coach Linda Moore said her team gained confidence as the game progressed and it resulted in an opening victory.

Although it was a three-set sweep, it wasn’t always easy for the Hornets.

Dallas County had ten serving errors in the opening set and only led 13-10 after the first minutes of the set.

Early on, it was serving that gave both teams problems. The Eagles kept it close in the first set, in part because of serving miscues, but Dallas County eventually pulled away. Britney Brown finished the set with consecutive pinpoint serves that landed on the back line to put the set out of hand.

The Hornets won the second set 25-12 and then completely dominated the final set 25-2 as Tori Hatfield dominated possession with consistent serves.

“That is something we work on all the time,” Moore said of how hard the Hornets have worked on their serving in practices. “The girls know as soon as they get in the gym to get a ball and start serving.”

With the loss of six seniors off of last year’s squad, Moore said it has been a big transition for her squad.

Ellwood Christian head coach Calvin Marshall said his team is young but he expects the Lady Eagles will improve throughout the season.

”The majority of my girls haven’t watched or touched a volleyball a day in their life,” Marshall said. “I only have three that played last year.”

Marshall said he expects his team to continue to grow this season after an impressive showing against the 5A Hornets.

“Overall my team is pretty good,” Marshall said, “They saw they can contend and this is the most girls I’ve ever had. I’m really excited about what we’ve got going on.”

Dixie Flips compete in first meet of the season