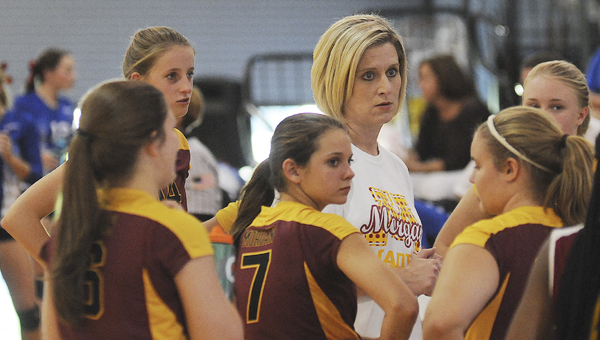 Morgan Academy head volleyball coach Dana Bohannon saw everything she wanted from a team in the Senators’ match Tuesday with Macon East — pinpoint serving, blocks at the net and great energy.

Unfortunately for Morgan, it was Macon East that showcased all of those qualities in a 25-10, 25-8, 25-7 sweep of the Senators.

“We are young and lack confidence,” Bohannon said. “[We had] missed serves, were not talking — just an overall lack of confidence in beating a team in that.”

Bohannon said the Lady Senators (1-5) still have a lot of things to work on in order to get better.

“We need to be more consistent at serving, and better footwork on passing on serve and receive,” Bohannon said.

Bohannon said it was good for her team to gain some confidence during the second set, but it didn’t last long as Macon East rebounded for a 25-8 victory to get back on track.

The Lady Senators had a tough time all day finding their footing against Macon East. Bohannon said confidence plays a big part in it.

It didn’t take long for the Lady Knights to close out the match, as they won the third set 25-7.

While the varsity is struggling early, the Lady Senators’ junior varsity stayed undefeated Tuesday with a come-from-behind victory against Macon East. Bohannon and Caroline Averitt

“I’m sure proud of them,” Bohannon said. “It’s just a glimmer of hope for the program.”

Morgan Academy is in the middle of a stretch where the Senators play six consecutive games at home.

The Senators next game is Thursday against Clarke Prep.

It’s early in the year, but several local teams are already dealing with injuries to some of their key players. ... read more