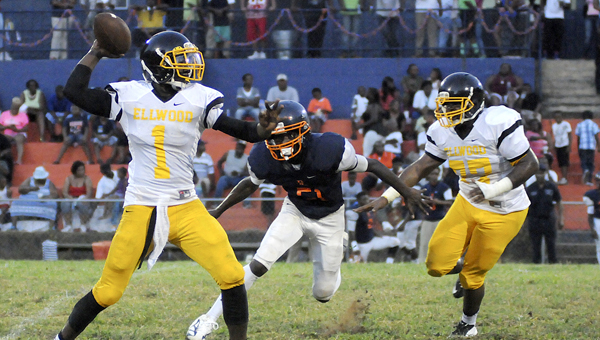 The remaining of the 48 minutes against the Francis Marion Rams proved to be far more difficult.

But, despite the mistakes, the turnovers, the penalties and more first-game jitters than most coaches could have survived, the Eagles prevailed, defeating Francis Marion 48-38.

“We made so many mistakes tonight,” Ellwood Christian head coach Eric Martinear said. “We learned tonight that we have to do better — all of us have to do better. But, we also learned that our hard work this summer paid off. Our conditioning work was the difference.”

Trailing at halftime, the conditioning Martinear referred to showed, as a number of key Francis Marion players were sidelined with cramps, while only a handful of Ellwood players required additional stretching on the sideline.

The victory — in addition to being credited to the Eagles conditioning — was locked up by timely defensive plays and stops, none more so than the late game interceptions by J’miere Solomon.

Solomon ended the game with three interceptions and stripped the ball from a Francis Marion returner on the game’s opening kickoff, returning the ball 20 yards for the opening touchdown.

But, despite that great start, the Eagles’ offense could not overcome a sluggish start and a number of procedure penalties. Ellwood ended the game with 62 yards in penalties, many stopping drives on offensive or keeping Francis Marion drives alive.

“The mistakes tonight almost cost us the game. We will look at the film Saturday and see the things that we can clean up before our next game,” Martinear said. “We have a bye week next week so we have time to work on our mistakes.”

After taking an early lead, the Eagles saw Francis Marion charge back to take a 14-6 lead with 7:03 remaining in the second quarter.

Ellwood would close that gap on its next drive, with backup quarterback Marqueith Gullet driving the team 81-yards on nine plays for a touchdown. The drive was capped off with Gullet finding receiver Michael Lewis for a 39-yard touchdown strike with 2:45 left in the half. The touchdown was the first of two second quarter touchdowns for Lewis.

The two-point try failed, leaving Francis Marion with a 14-12 lead.

Francis Marion would score a touchdown on its next drive to extend the lead to 22-12 with just 39 seconds left.

After a solid kickoff return, starting Ellwood quarterback Jalen Furlow took command of the offense at Ellwood’s own 46-yard line.

Taking the snap on second down, Furlow scrambled, and as the buzzer sounded, he flung the ball down the field where he found Lewis for a 54-yard touchdown strike to further cut into the Rams’ lead, 22-18.

Furlow would lead a scoring drive on the first drive of the third quarter to give Ellwood the lead.

He ended the game with 196 yards rushing and three touchdowns, while throwing for one other. Ellwood is off next week, but will take on Akron Sept. 5.