County has no use for property; city not sure if it’s worth the trouble 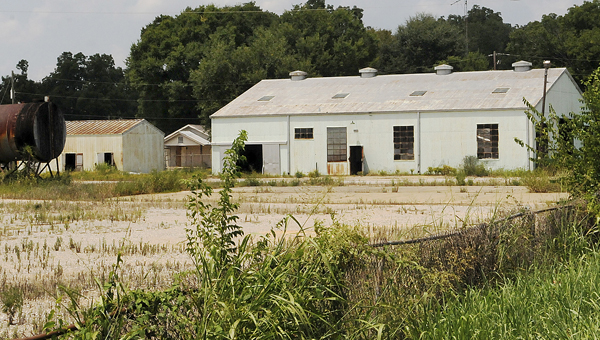 A piece of county-owned property, located in at the intersection of Plant Street and Hardive Avenue, used to be used as a county shop, where county vehicles were serviced and stored. But, after years of vandalism and other problems, the county moved its operations, leaving the property nearly abandoned. (Josh Bergeron | Times-Journal)

The City of Selma could bolster its land portfolio by about a city block, but, with concerns about health hazards, active discussion about a standing offer ceased years ago.

During her time as a Ward 8 councilwoman, Jannie Venter requested that an unused piece of county property, colloquially called the county yard, be given to the City of Selma. Though it was previously used to repair Dallas County government vehicles, Venter said it could work well as an apartment complex because it’s situated next to a residential area, the city fishpond and the Dinkins Pool.

Dallas County Probate Judge Kim Ballard said the county yard had been in operation for years before he became the head of county government. The county moved its vehicle repair operations when Ballard took office, partially because of crime and location, he said.

“We had a huge issue of vandalism and theft of gasoline, diesel fuel, parts off of cars. It was just rampant,” Ballard said.

The county moved its repair operations to a building on U.S. 80 West, near the Dallas County Sportsplex, which helped significantly, Ballard said.

“Our shrinkage and loss from vandalism isn’t even a factor now,” he said.

Venter said the county’s move lowered the amount of traffic coming through the Ward 8 neighborhood, but left a large piece of property abandoned.

“I know at some point we were going to purchase it,” she said. “Since then, nothing has been done. Essentially nothing else has happened with it.”

Venter said she even jokes with Ballard occasionally about when she is finally going to give the county its money for the property.

“It has potential, but we have to look at the bigger picture,” Bowie said. “I think the city would take it if it meets the environmental requirements.”

“If we take the property without having any kind of studies or clean up, then the city would take on the responsibility of paying for any kind of headache that might come with it,” he said.

The county yard sits at the intersection of Plant Street and Hardie Avenue. In several places, its metal fence is broken or leaning over. Grass grows through cracks in a large slab of concrete. A portion of ground underneath a metal tank is blackened and cracked.

Inside of the county yard’s largest building, old flyers and a used whiteboard still hang from the walls. Many of the building’s windows are broken.

Johnson, like those before him, sees potential in the land.

“So much can be done out there,” he said. “That whole area, with the fish pond and baseball fields, is almost a recreation area.

Despite potential, the county and city disagree on one point — who should be responsible for any environmental studies or cleanup.

“It could be looked at by the city as a toxic asset and something they don’t want,” he said. “In some of the places, they changed oil and it could have gotten into the ground. There could have been gas leaks. I hate to see a city block just sit there and deteriorate.”

Ballard said the county has cleaned the property regularly.

If the city ultimately declines the longstanding offer, Ballard said the county would likely pay for environmental studies and perform major cleanup.

There’s no urgency to a transfer, according to both Ballard and city officials. It’s simply a piece of land the county wants to get rid of, Ballard said.

“We really have no plans for it whatsoever,” he said. “If the city isn’t interested, we would certainly accept a monetary gain and put it on the market.”