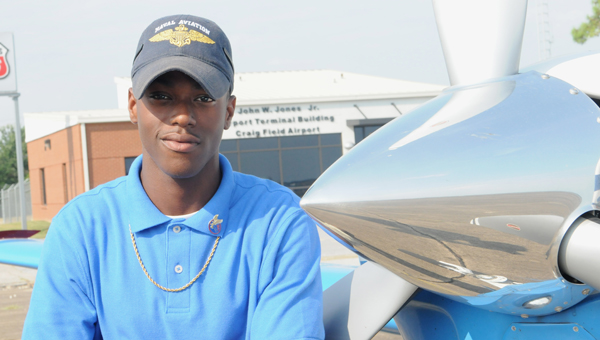 Selma Air Employee and Selma High student Desmond McWilliams stands next to a plane Thursday at Craig Field Airport. McWilliams currently has his student pilot’s license but is studying to get his full license (Josh Bergeron | Times-Journal)

“Being up in the air is like a big old playground that never ends,” he said. “The view from the sky is amazing. Selma looks like a little raisin on the ground.”

McWilliams, 17, works at Craig Field with the Selma Air Center, which provides many of the necessities and amenities for incoming pilots, including gas.

McWilliams currently has his student’s pilot license and is working toward becoming a full-certified private pilot, but his interest initially began as a simple question from his father Ronald.

Ronald said he asked the crew at Selma Air not to pay his son until Desmond was sure flying was something he was interested in.

After a short, summer stint without pay, Desmond worked part-time during the school year on Craig Field and has now been an employee for about two years.

An aviation-centered event at Craig, hosted by Wallace Community College, helped Desmond connect with Tuskegee University’s aviation program, where he discovered a summer camp that would allow him to get his student pilot’s license.

At the camp, which wrapped up on July 26 in Houston, Desmond graduated at the top of the class and was the only attendee to fly solo three times.

When flying, especially by himself, Desmond said the words of his instructors constantly echo in his mind.

“It’s pretty much like you’re never alone,” he said. “I’m not nervous, but vigilant. It’s like the words are all stuck in my head and I can’t get them out.”

After graduation from Selma High, Desmond said he has considered joining the Air National Guard and, later, becoming a private pilot.

Besides getting the opportunity to fly, Desmond said his favorite part of his overall aviation experience was helping to disassemble a plane at Craig Field.

Richard Cook, who is one of two people that run Selma Air, spoke highly of Desmond.

“He learns quickly and, if we can keep the girls away, I think he’ll do fine,” Cook joked. “He does all kinds of stuff, from pumping gas to sweeping the floors.”

“He does a bunch of different things, everything from pumping gas to sweeping the floors.”