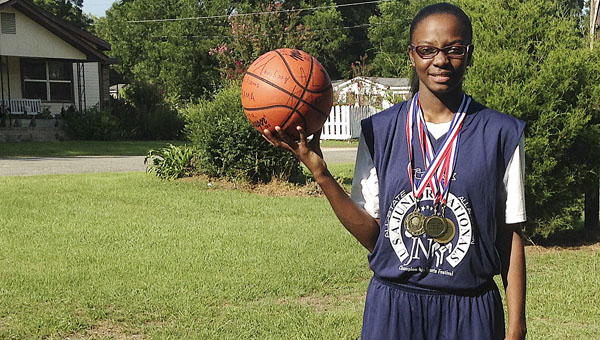 Selma High School basketball player Areyana Williams is taking every opportunity she can to try to get better.

Along with working with her uncle Ulysses Blackmon Jr. this summer, Williams took part in the 2014 USA Junior Nationals International Sports Festival in Columbus, Ohio July 8-12.

As a freshman last year, Williams averaged 9.4 points per game and 7.4 rebounds per game for the Saints, but she wants to keep improving so that one day she can play basketball in college. She’s hoping the things she learned at the camp — improved post moves, learning to work with teammates she had never met, and more — will help her take the first step in getting there.

“It is going to help me get to the next level by making me better,” Williams said.

Williams was named her team’s MVP after averaging 15 points and six rebounds per game.  She played on a team made of players from Canada, Alabama and Colorado and was one of only two sophomores on her squad.  The camp included getting a chance to meet college coaches from around the country.

“I was pretty nervous because I didn’t know anybody,” Williams said. “There were people from different countries and states.”

On the basketball court, it didn’t take her long to find her footing. Williams was named to the camp’s All-American team, despite playing with a team of people she was completely unfamiliar with.

“I think that was one of her big adjustments was to be able to adapt to the game with strangers,” said William Waheed, who serves as one of Williams’ mentors.

Williams has only played three years of organized basketball. She played on a team for the first time in seventh grade, and played for the Saints’ varsity as an eighth grader.

Last season, she was one of the key contributors on a Saints’ team that hosted a sub-regional contest and reached a ranking as high as No. 5 in the state.