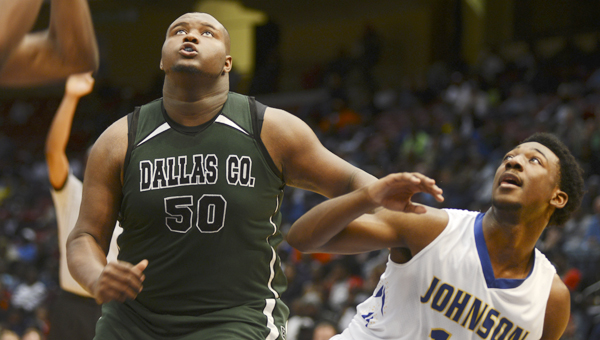 Dallas County’s Lowell Furlow helped the Hornets win a state basketball championship last year, but he’s getting a lot of attention for his play on the gridiron. Furlow has offers from Southern Mississippi and Mississippi State.– File Photo

Furlow, who is 6’9” and over 300 pounds, is expected to be one of the anchors on the Hornets’ offensive line this upcoming season, has football offers from Southern Mississippi and Mississippi State and has received interest from countless other programs.

Smith, who is entering his first season at the helm for the Hornets, said he has sat down with Furlow to give him an honest assessment of what he has seen of him on film and that the big man has responded very well to it.

“If you throw in a film of him the last couple of years, you don’t see the quality that needs to be there for somebody his height and his size,” Smith said. “He has taken that personal in a very positive way.”

Smith said Furlow wants to change that perception by working hard this offseason and showing his improvement on the field.

Smith accepted the head football position in June, but has known Furlow since January because he helped behind the scenes during the Hornets’ basketball team’s run to the Class 4A state championship.

Furlow started at center on that team, which brought home the school’s first basketball championship.

Now, he’s focused on where he will attend school next year.

Furlow will visit Southern Mississippi next week for the first time and Smith is planning to go with him.

“He has done the research on Southern Mississippi,” Smith said. “He has looked at their campus, and now he wants to see it first hand.”

Furlow has announced in the past that Mississippi State is his current leader, but the Eagles are also recruiting him hard, and Smith has known Southern Mississippi offensive coordinator Chip Lindsey for a long time. When Lindsey was coaching at Hoover and Spain Park, Smith was coaching at John Carroll, but he said that will not play a factor on Furlow’s decision.

“It is like I told him, that is not going sway whether he goes there, or goes to Mississippi State or goes anywhere else,” Smith said. “That’s never going to play a part.”

Smith said Furlow has learned to focus on the schools that have already offered him, over the ones that may offer him in the future.

“One of the things with his recruitment is he doesn’t want to be somebody’s second or third choice,” Smith said. “He has now looked at his recruitment and seen these schools that have actually 100 percent jumped onboard with him as a football player.”

It’s official. Southside High School’s Khamari Gibbs and Keith High School’s Destiny Hall will be on the cover of the... read more