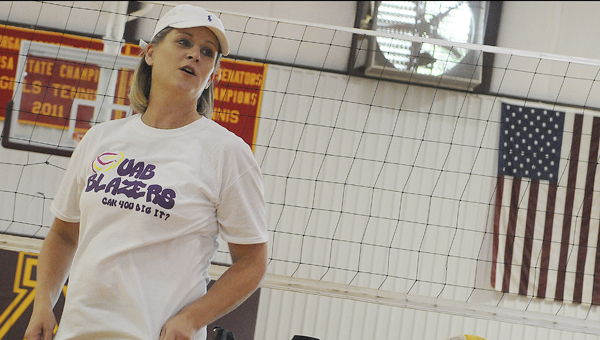 Morgan Academy’s Dana Bohannon talks to her team during the first day of volleyball practice. Bohannon is the Senators’ new volleyball and girls’ basketball coach. She has previously coached at Lee High School and Pleasant Grove High School.–Daniel Evans

After a long search that started in April, Morgan Academy has hired a new volleyball and girls basketball coach.

“It is really just what I love,” Bohannon said. “I love the kids and I love volleyball, so the combination is perfect.”

Morgan Academy athletic director Jake Wingo said the school interviewed three to four candidates for the positions, but that Bohannon was the best candidate because of her experience playing the game and coaching.

“She has got a lot of experience,” Wingo said. “She’s coached at some big time public schools and has had a lot of success. She was a player too, so she’s just a great fit. She’s very knowledgeable about the game, so we are lucky to have her.”

Morgan Academy won an Alabama Independent School Association state volleyball championship in 2009 and has consistently had a winning program for most of the last decade.

Last season, the Senators lost in the AISA Elite Eight.

Morgan’s girls’ basketball program did not fare as well last season, as the Senators lost every game.

Bohannon’s basketball background is more limited, but Wingo is confident she will have a positive impact in both of the Senators’ programs.

“She has high expectations for herself and her team and I know she is going to give our girls the greatest opportunity to be successful,” Wingo said. “I’m confident in her, and I’m excited to see what she can do.”

By taking the Senators’ coaching positions, Bohannon will also get a chance to coach her daughter, Abbie, in volleyball.

The Senators participated in a camp at UAB last week and competed against some of the largest high schools in the state, including Baker, who is a 7A school in the Alabama High School Athletic Association.

“We managed to stay in the game and we learned a lot,” Bohannon said, adding that she was proud of her team to stick with a high school that size and be competitive for a whole game.

Three Selma All-Star baseball teams will continue their pursuit of state championships this weekend. As the 11-and 12-year-old O-zone All-Stars... read more