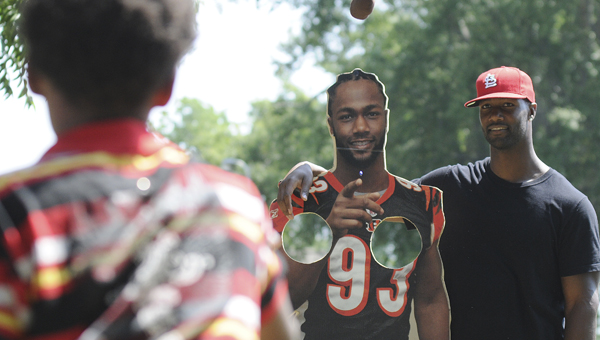 Selma native and NFL star Michael Johnson stands by a cutout of himself donning a Cincinnati Bengals jersey as a participant throws beanbags during Saturday’s MJ93 Fun Fest at Concordia College Alabama. Johnson will be a member of the Tampa Bay Buccaneers this upcoming season. (Daniel Evans | Times-Journal)

Michael Johnson is still settling into life as a member of the Tampa Bay Buccaneers, but the Selma native was back in town Saturday for the MJ93 Fun Fest at Concordia College Alabama.

The Fun Fest allowed area youth to take photos with Johnson, as well as jump in inflatables, take a ride in a train and win prizes.

“[I enjoy] just watching the kids, free spirited, run around, no cares in the world, just having a good time,” Johnson said. “That’s the joy of our youth. They are our future but they are so impressionable right now so everything they do is so innocent. They are just out having a good time and enjoying themselves.”

Hattie Garner’s little cousins, Geequail Garner and Geeliyah Garner, couldn’t sleep last night because they were so excited to meet Michael and participate in the Fun Fest.

“They barely slept last night, and this morning they woke me up at around 5 o’clock telling me to get ready,” Hattie said.

Johnson made sure Saturday’s participants had a good time, as he shook hands and took part in some of the games. The Dallas County High School graduate tried his hand at throwing beanbags through a cardboard cutout of himself donning a Cincinnati Bengals jersey and even danced a little.

“You get to step away from the grind of every day and allow yourself to be a kid again and really enjoy the youth and fun,” Johnson said of Saturday’s Fun Fest.

Johnson’s every day includes getting accustomed to playing for a new team in a new city.

The defensive end signed a five-year contract with Tampa Bay reportedly worth $43.75 million in March after spending the first five years of his career with the Cincinnati Bengals.

“It has been an adjustment because I was in Cincinnati for five years, and I kind of have to start from scratch as far as building relationships and knowing the lay of the land and that sort of stuff,” Johnson said. “It was a little tough at first, but I am getting adjusted, learning teammates, coaches and getting a feel for the city. As things go, it gets easier and easier.”

“It will be a lot warmer than what I had become accustomed to and that’s a good thing, Johnson said.

A free basketball camp in July will give area youth a chance to learn from players from the University of... read more