Swim team is growing in numbers 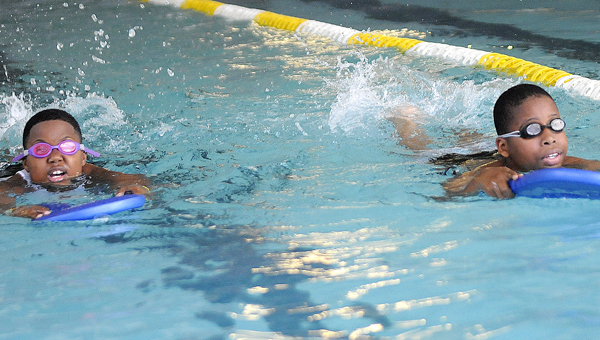 The YMCA of Selma-Dallas County is hoping its revived swim team program will be ready to compete by the time fall rolls around.

At the rate it’s growing, that seems to be very possible.

The team started two weeks ago with four swimmers, but has already grown to 12 this week.

“It is growing every day,” YMCA swim team coach Jorgianne Massey said. “We have a new kid every day, and hopefully in the fall these kids will ask us, ‘Can we keep going, can we keep going?’ That’s what we want.”

Massey, who swam competitively for 12 years, said she is hoping YMCA can field a travel team in the fall.

“We are looking to compete in the fall,” Massey said. “In the summer, we are just testing the water, seeing if the kids like it and going from there.”

Early reviews from the participants seem to be positive, and early on they have shown a lot of potential.

“We’ve timed some of the kids and they are pretty fast,” assistant coach Patrick Haskell said. “By the time it comes to the fall, they will be competitive ready.”

Right now the group is small, but Caleb McDougal, who also serves as a coach for the team, said that might be an advantage.

“You get good kids everywhere but what I think is going to make this team better is we are smaller, so we can give more individual [training] time,” McDougal said. “It is going to help each of them individually, and they are going to become a tight knit group.”

It took members of the YMCA’s last swim team — nicknamed the Gators — to get the program revived. McDougal and Haskell comprised the entire YMCA of Selma-Dallas County swim team in 2010, the last year it existed. Both swimmers — now students at Dallas County High School — now serve as coaches for this year’s team.

McDougal said he has already learned a lot in his first two weeks as a coach.

“It is a lot different,” McDougal said. “I didn’t realize it is so hot on the pool deck, and I didn’t realize it was so hard to get kids to listen sometimes, but it’s worth it. When you see a kid’s time drop and see the look on their face when it drops and it’s all worth it.”