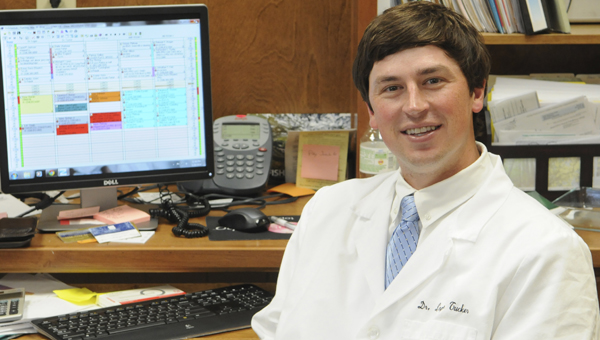 Dr. Logan Tucker wasn’t sure he would fit in in Selma when he and his wife Abbie moved to town three years ago and started Tucker Family Dentistry.

Now, when he thinks back, he laughs about those worries because Selma quickly took him under its wing, and today he’s proud to call the city home.

“I was nervous when I first moved back to Selma because Abbie is from here and I thought it might be weird but we have been so on the go and so plugged in since we got back that it has been great,” Tucker said. “It has been really great.”

Tucker, who grew up in Centre, and Abbie met at Auburn University and then were both accepted into the University of Alabama at Birmingham’s dentistry school. They were married in Selma in 2009, and after another year away, they moved to town to start their practice.

“We always looked at doing something in a small town,” Tucker said. “We didn’t know per se it would be Selma, but we kind of had a pull here and thought about coming here. Something was kind of pulling us so we talked with Dr. Russell and Dr. Williams and prayed about it, and it has been good.”

“For a long time, nobody really recognized us outside of our jackets and masks,” Tucker said. “I went to the grocery store last week and bumped into like six patients. I was like ‘Uh oh, people are starting to realize that we’ve been here for a while.”

Tucker said it was an easy choice to work with his wife Abbie, especially after the two made it through the stress of dental school together. He feels like their contrasting personalities make their practice what it is and allows more patients to feel more comfortable when they are in the dentist chair,

“We are two totally different people, especially with patients,” Tucker said. “I’m kind of loud and cut up and Abby is very professional and very direct. Some people don’t want somebody that is in there talking to the assistant and cutting up and some people do.”