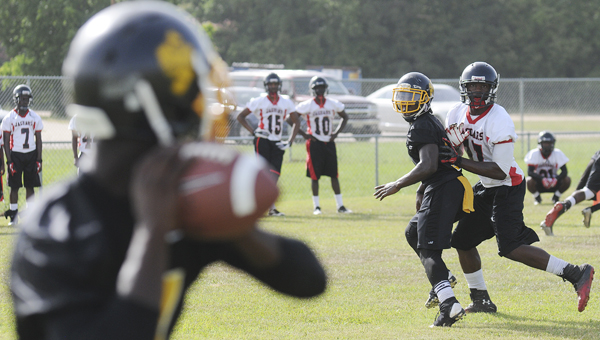 Ellwood Christian quarterback Jalen Furlow looks towards a covered receiver in a 7-on-7 game against Hillcrest-Evergreen Tuesday at Southside High School. Furlow and the Eagles were one of four teams that participated in Tuesday’s 7-on-7 camp. –Daniel Evans

What a difference a year makes.

Southside didn’t have much of a passing game last season, but Tuesday, at the Panthers’ 7-on-7 camp, the team showed that may not be the case this year.

Panthers quarterback Khamari Gibbs showed off his arm, rocketing touchdown passes to Damian Watts and Dequan Johnson throughout the afternoon.

“He is going into his junior season and he is putting in everything he learned from those past two years of experience,” Flowers said. “Now this looks normal to him. The games have slowed down. Last year he was more hesitant throwing the ball and now he is letting the ball slip off his hands and he’s not worried about anything.”

Gibbs threw two touchdown passes Tuesday in Southside’s game versus Wilcox Central, four in a contest with Hillcrest-Evergreen and three others in the Panthers’ battle with county rival Ellwood Christian.

Most of the touchdowns went to Watts and Johnson, who shredded defenses for score after score.

Flowers said after two years of having extremely young teams, the Panthers are finally coming of age.

“The last two years we had a lot of ninth and tenth graders,” Flowers said. “Now they are juniors and seniors. That’s the reason for our success — the guys are used to playing with each other.”

While the Panthers were showing off their passing game, Ellwood Christian head coach Eric Martinear was using the 7-on-7 as another opportunity to evaluate his team.

Martinear, who is entering his first year as the Eagles head football coach, came out of the spring confident his team could run the ball. Tuesday, he evaluated how far along the team’s passing game was, and came away knowing there was still work to be done.

“There’s a long ways to go,” Martinear said. “There’s high expectations. You see me coaching, screaming because that’s how I am. If I go over something I expect [the guys] to know it, because I am teaching it. We just have to execute. That’s our main thing, executing and believing.”

“This guy missed the spring game, missed a lot of the snaps in practice during the spring because of a knee injury, but we are working hard this summer to try to get him up to speed,” Martinear said.

Along with Southside and Ellwood, Wilcox Central and Hillcrest-Evergreen participated in Tuesday’s 7-on-7 camp. All four teams rotated playing contests against all of the other teams at the camp.

Games were 18 minutes long. Each team played a total of five games, with no official score being kept from any of the contests.