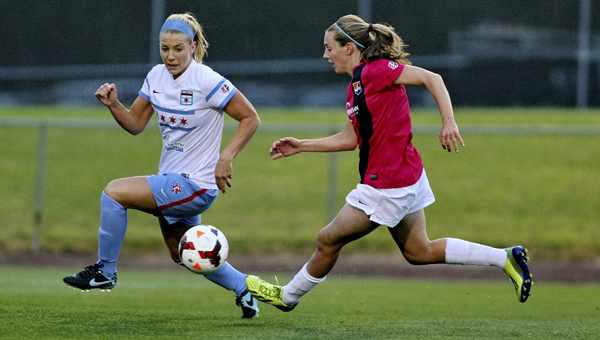 Selma resident Katy Freels of Sky Blue FC, right, kicks the ball past an opponent in a game earlier this season. Freels, who has scored four goals this season, and her husband Kevin, moved to Selma in July 2013 and love the small town atmosphere.– Robyn McNeil | Sky Blue FC

Selma is far from the busy streets of New Jersey and slower paced than the hectic travel schedule of a professional athlete, but those two features highlight what Katy Freels likes the most about her offseason home.

Freels, a midfielder for Sky Blue FC in the National Women’s Soccer League — the highest level of professional women’s soccer in the United States — and her husband Kevin moved to Selma in July 2013.

“I live in New Jersey right outside of the city [during the season] so (Selma) is just polar opposite,” Freels said. “The people are just so nice. Our neighbors have been so nice and when you go to the supermarket you always see somebody you know and get into a conversation, so we’ve really settled in nicely. We really love the lifestyle.”

Freels grew up in the Birmingham area and fell in love with soccer at an early age and the sport has taken her to incredible heights. She is one of the most decorated soccer players in Auburn history, where she is the school’s all-time leader in points scored, assists, matches played and game winning goals. She’s also already shown that she has the mettle to compete on the world’s stage.

“I wanted to play professionally because that is the next step out of college, but I also want to make the U.S. national team,” Freels said. “That’s the ultimate goal. So, that’s kind of why I’m playing professional, and the end goal is always in sight.”

At one time, Freels thought her hope for a professional career might be in jeopardy. Freels was drafted tenth overall out of Auburn by the Atlanta Beat in the 2012 Women’s Professional Soccer league draft, but before the season the league suspended operations and folded.

“It was a bummer for sure,” Freels said. “It’s cool looking back because God has had a plan the whole time, but in that moment I was like ‘what am I going to do, what’s going to happen?’”

It all ended up working out for Freels, who immediately found a home with the West New York Flash in the Women’s Premier Soccer League Elite.

Freels helped lead the team to the league championship in her only season with the team.

The Sky Blue then acquired Freels by selecting her fifth overall in the NWSL Supplemental Draft.

After only scoring one goal in 22 games last season, she has already scored four goals in ten games this year.

“This year has been a lot better for me,” Freels said. “Last year I felt I played well, but I didn’t score goals that I should have scored and things like that. I’ve scored a few goals this year, which is nice, and it always helps your confidence.”

Freels isn’t the only professional soccer player that has roots in Selma. Mia Hamm, who is widely considered one of the best women’s soccer players in American history, was born in Selma in 1972.

Freels said she has heard all about it and loves that people in Selma recognize it.

“It’s funny because everybody in Selma, like all of our neighbors and people in the church and people we meet are always like ‘You know, Mia Hamm is from Selma,” Freels said. “I bet I’ve heard that ten times since I moved here.”