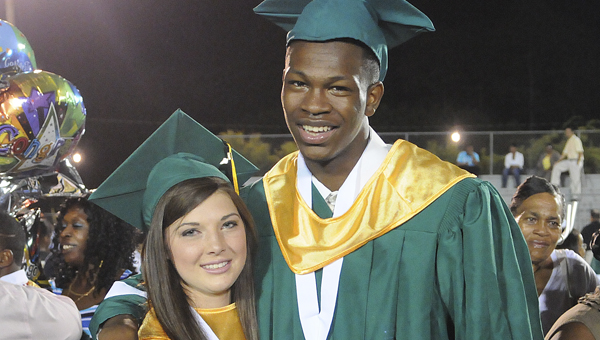 Dallas County’s Amy Persinger, left, and William Lee, pose for a picture after Friday night’s graduation ceremony. Persinger and Lee were also named the winners of the Times-Journal’s Facebook fan vote of the year to determine the male and female athletes of the year.–Daniel Evans

Dallas County High School’s William Lee and Amy Persinger celebrated one of the best moments of their lives Friday night, but it had nothing to do with winning a fan vote that determined the Times-Journal’s athletes of the year.

Lee and Persinger received their high school diplomas Friday at Dallas County’s graduation ceremony, hours after winning the Times-Journal’s Facebook fan vote. Lee, who will play basketball at UAB in the fall after leading the Hornets to their first basketball state championship, had to sweat it out a little more than his counterpark.

Persinger won by a much more lopsided margin, rolling past Keith’s Zykia Pettway. Persinger was a key cog on the Hornets’ softball and volleyball teams this season. She will play softball at Auburn University Montgomery next season.

Neither player had an easy path to the finals. Lee had to survive close matches seemingly the whole way. He defeated Ellwood Christian’s Jalen Furlow, Keith’s Anfernee Simmons and then held off Watters to win the title by four votes.

Persinger rolled past Southside’s Calvondrea Blackmon in her opening game of the tournament and then rallied past Meadowview Christian’s Claudia Kendrick in a wild semifinal match that saw both players receive over 500 Facebook likes.

The tournament ran from May 15-23, with a bracket determining matchups that were voted on by fans on Facebook. To vote, fans liked the picture of their favorite athlete on the Times-Journal’s Facebook page. New matchups were posted daily, except for in the championship round, which lasted three days.

Scott Phillips, organizer of the All-Afternoon Bass Tournament, and his brother Mark won the series’ first tournament of the year... read more