Jake Greer carded a final round 71 Sunday to win the 86th annual Selma Country Club Invitational tournament by one stroke over Selma’s Will Pearce and three shots ahead of Selma’s Paul Garner. Greer had an aggregate score of 212 for the 3-day tournament shooting a 71 on Friday and firing a 70 Saturday. 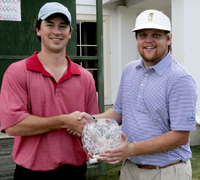 “On the back nine I bogeyed the par three 12th,” said Greer, who also birdied the par four 11th. “After that I just kept making pars. I just tried to make it easy on myself. I don’t think I had anything over two feet for par so that helps.”

Greer has definitely made the most of his play at the Selma Country Club, finishing runner up to Decatur’s Matt Gourgeot, who finished nine shots back this year.

“The only six rounds I’ve played [at Selma Country Club] were in the tournament last year and this year,” Greer said. “It’s a fun course. It’s one of the toughest short courses I’ve ever played in my life. It’s got a lot of ups and downs you can’t even see out here.”

Third flight “A” Division winners were Selma’s Beau Boyd [226], with Jeremy Riley and Jason Brady tying for second at 233.