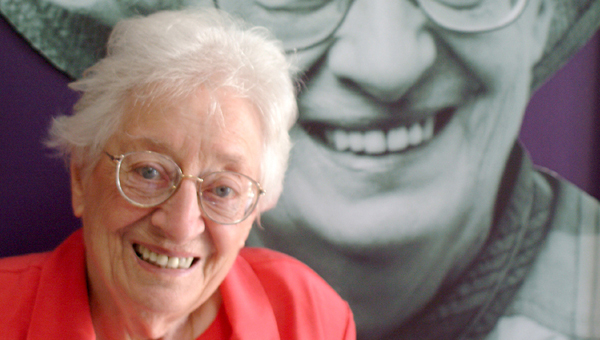 all smiles: The University of Alabama Press is set to re-release Kathryn Tucker Windham’s 13 Alabama Ghosts and Jeffery this summer. (File Photo | Times-Journal)

The spooky stories in Kathryn Tucker Windham’s “13 Alabama Ghosts and Jeffrey” are set to haunt bookshelves across the state once again as a commemorative edition is set to be released this summer.

Forty-five years after its original release, a special hardback edition of the book is tentatively set to go on sale this June, and University of Alabama Press director of sales and marketing J.D. Wilson said he’s sure the book will once again go flying off the shelves as it has in years past.

“I don’t have any stats to back this up, but I would almost bet this was one of the most read books in Alabama after ‘To Kill a Mockingbird,’” Wilson said. “It really is this emblematically Alabama experience to kind of grow up in the state and have a parent or a teacher read these stories to you.”

Wilson said the book would appear nearly identical to the original, with the only exception being a barcode on the back cover.

Windham’s daughter, Dilcy Windham Hilley, said she was thrilled when it was confirmed UA Press would be rereleasing the book that was her mother’s most well-known work.

“Even this generation, coming up in the schools now, has read it as well,” Hilley said. “It has really endured in popularity in an amazing way. It’s incredible how many people of all ages have told me they’ve read it or how difficult it is for their library to keep it on the shelves because people are always checking it out.”

Windham’s son, Ben Windham, said the book’s summer rerelease is a great way from the Windham family, as well as readers across the state, to remember the passion his mother — who passed away in 2011 — had for her craft.

“The books are a product of mother’s life-long interest in folklore,” Ben said. “She kindled that interest in me and I am forever grateful for it. I’m very glad that the UA Press has decided to publish a commemorative edition of the first ghost book this summer. It is a wonderful tribute to her, her passions, her co-author and former teacher Margaret Gillis Figh, and the book’s many readers.”

Wilson said the book has stood the test of time and remains one of the preeminent must-reads in Alabama literature.

“The Press’ core mission is to advance scholarship, but we also want to create work and books that reflect the culture and traditions of the people of Alabama,” Wilson said.  “And I think this book really does this almost better than anything.”

The chance of rain won’t force organizers to cancel or delay Friday’s Dallas County Relay for Life, but it has... read more