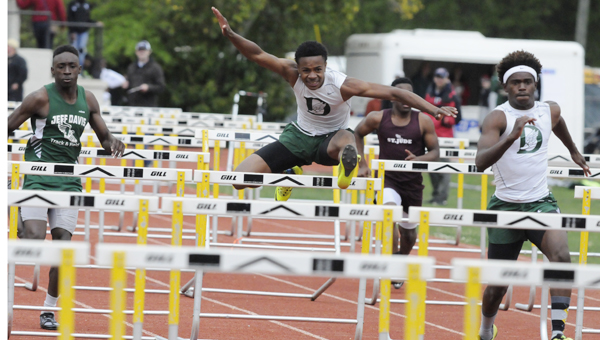 Dallas County’s Quintavis Parker, above, runs in the 110-meter hurdles Tuesday during the Bobby Dolbare Invitational, finishing second with a time of 16.36 seconds to teammate Xavier Knight. Parker won the 300-meter hurdles, flipping the script and edging Knight.–Daniel Evans

The Hornets finished with a total of 158.83 overall points, which was just enough to edge second place Stanhope Elmore, who finished with 153 total points, and third place Robert E. Lee.

In the below average temperatures and whipping wind, Dallas County didn’t get off to the hot start that head coach Robert Dolbare had hoped for, but the Hornets pulled it together in the hurdling and jumping events in time to soar to the top of the overall standings.

“I thought we really found ourselves in the hurdle races, the 110 and the 300-meters,” Dolbare said. “I thought our jumping events were huge today and we did a good job of compiling points and adding up points as we went and competing hard throughout the day. Hurdles and jumping is really where we turned the corner.”

Xavier Knight and Quintavis Parker sped around the track in the 110-meter hurdles and 300-meter hurdles to help Dallas County get in the winner’s circle.

Because of Knight and Parker’s finishes, along with Ben York’s second in the 800-meter run and Caleb McDougal’s first place in the discus throw, the Hornets’ dominated the overall men’s standings. Dallas County finished with a total of 112.83 points, which was well ahead of second place Stanhope Elmore’s 66 points.

The Hornets’ girls did their part as well by finishing fifth in the women’s standings. Dallas County’s Kandyce Hardison finished second in the discus throw and in the javelin. Shay Spradley also finished third in the discus throw for the Hornets, who needed every point to beat a field that included teams from every classification in the Alabama High School Athletic Association.

“It was not our best day but it was probably the hardest we’ve ever fought to win a meet,” Dolbare said. “It meant a lot to us, being our meet and the kids really wanted this one. They wanted it bad and overall it was a good day for Dallas County High School.”

The Hornets won the event, but other local teams had some bright spots as well.

Selma came in 11th overall in the team standings, but Kadarious Brown finished second in the discus throw and Jacquetta Dailey finished fourth in the women’s 100-meter dash. Selma head coach Ivery Williams, who was disappointed in his team’s performance in the Selma High Invitiational a few weeks ago, was much happy after Tuesday’s performances.

“Even though the weather was bad this morning, it seemed like everybody came out ready to run and compete,” Williams said.

Keith finished 17th with a total of 20.5 points. Anfernee Simmons finished third in the long jump with a score of 5 feet, 8 inches and Quomila Johnigan finished second in the women’s 400-meter dash with a total time of 1:07:54, falling just behind Stanhope Elmore’s Quinterria Stallworth.

“Overall we did pretty well, competing against some of the other 1A, 2A, 3A, 4A and even 5A schools, we held our ground pretty well,” Keith head coach Clifton Reeves said. “My boys came in in the heat in the 4 x 100 and Quomila Johnigan once again performed very well.”

Sectional qualifying for the AHSAA state track and field meets takes place April 25 and 26 and the state meets are May 2-3 in Gulf Shores and Selma.

Anna Grace Small bats for Interlink Drugs in a 9 and 10-year-old softball game Saturday against Woodmen of the World... read more