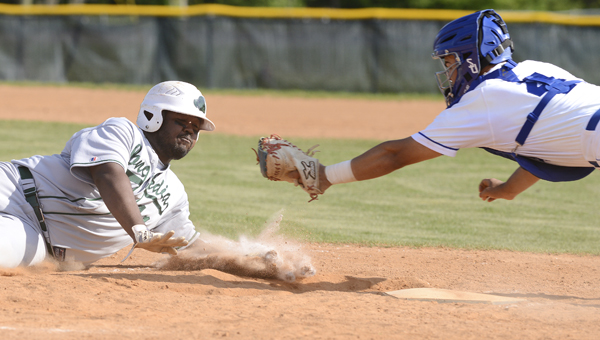 After over three weeks without playing a game, Selma University is back on the baseball diamond and back to showing why they are on top of the United States Collegiate Athletic Association standings.

Following two blowout wins over Lane College Thursday, the Bulldogs defeated county rival Concordia College Alabama 7-5 and 13-1 Friday. The four wins in two days had to feel good for a team that hadn’t played any games since March 18, an incredible span of 23 days, due to rainouts, cancellations and a week off for spring break.

“It feels good. The guys are pumped up; they are excited to be playing again,” Selma head coach Adrian Holloway said. “You can see it on their faces and in their body language.”

The Bulldogs seemed to get right back in the groove against Concordia — a team that they have now beaten six times this season.

In the first game, Selma had to rally from behind. Concordia tied the game at 3-3 in the bottom of the third inning when Yaluan Ortiz doubled off Selma starting pitcher Tarus Hervey. A few pitches later, Carl Fleeting scored in an unconventional way -— stealing home — to give the Hornets a 4-3 advantage.

With the Bulldogs’ lead gone, Hervey, who has been dealing with an elbow injury, was pulled and replaced by relief pitcher Daniel Keller.

Keller slowed Concordia’s momentum, getting the Bulldogs out of the jam they were in and only allowing three hits the rest of the game.

“He has been a steady pitcher for us all year,” Holloway said of Keller. “He has a tough mentality and when you put the ball in his hands he’s up for any challenge.”

The Selma offense also did its part by giving Keller a lead to work with. David Lee doubled in the fifth inning to tie the contest 4-4 and Erik Siejack scored in the sixth on a wild pitch to put Selma up a run.

Siejack’s score came after Concordia starting pitcher Darryl Watkins had exited the game. Watkins was replaced by Dayan Patterson, the Hornets’ closer, who was erractic from the opening pitch.

Patterson eventually found himself in a bases loaded jam and Concordia head coach Curtis Wimberly pulled him, understanding that his closer probably didn’t have his best stuff.

Christian Brisco entered to pitch for the Hornets with the bases loaded and only one out. Mitchell Webb III, the first batter he faced, doubled to center field to score two runs to give the Bulldogs a 7-4 lead.

“We went to our closer and he didn’t have it today,” Wimberly said. “I brought in my lefty, Brisco, and he did the job. In hindsight if I bring Brisco in before Patterson, we may have been in a better position to win the game.”

Selma added one run in the bottom of the seventh — the game’s final inning — on a fielding error, but couldn’t inch any closer.

“The kids played hard but kudos to the No. 1 team in the conference,” Wimberly said. “They know how to win.”

The second game resembled the first four games the teams had played this season, as Selma dominated in a 13-1 victory.

Holloway said his team kept the momentum rolling from the first game and used it to push through in the second contest.

“We played Selma University baseball that second game,” Holloway said. “Our bats were hot, our pitching was on point as usual and we had the defense to go behind it.”

Juan Pablo Martinez led the Selma offense. Martinez tripled in the fifth inning and doubled in the sixth to score runs. Selma built a 5-1 lead after four innings and then erupted for seven more runs in the game’s final two innings. The game was called after six innings, due to the ten run rule.

”You can’t make errors against a bad team and expect to win,” Wimberly said. “When you are playing a good team with the credibility that Selma University has you are bound to come up short.”

Five of Selma University’s six wins against Concordia this season were by double digits. The Bulldogs outscored the Hornets 56-8 this season in the six games the two teams played.