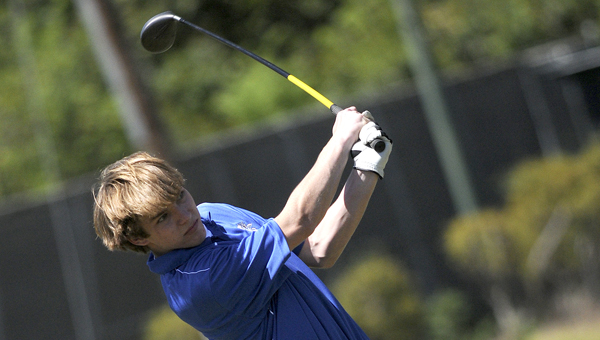 In 1992 Brad Pitt starred in “A River Runs Through It,” a film many consider a classic directed by Robert Redford.

Thursday, Selma might have seen it’s very own version. This time the setting was the Selma Country Club and the stars were 70 high school golfers from throughout the state and Tommy Burns, the club’s golf professional and course director.

With heavy rains throughout the week, water from Valley Creek, which borders a portion of the course, backed up, forcing course officials to restrict golf to the course’s first nine holes.

“Tommy and his folks did an amazing job getting the course ready for us to play today,” Morgan Academy golf coach Ira Wagoner said after Thursday’s tournament. “To figure out a way for us to get these golfers through the first nine holes, twice, was great work.”

Cutting the course in half also forced longer rounds, Wagoner said. But that was easily offset by gorgeous spring conditions.

“It was easily the best conditions we have played in the entire season,” Wagoner said.

As for the golf, Wagoner’s Senators fell short in the 13-team field, but a consistent winner again stepped up.

Lee-Scott Academy, from Auburn, claimed the tournament title, continuing their streak of winning each of the tournaments they’ve competed in this season.

Morgan’s top golfer, Ford Manderson, finished fourth overall with a round of 75. His performance also earned him all-tournament team honors.

Morgan Academy’s Harrison Watters jumps over a defender in a soccer game earlier this season. Watters and the Senators saw... read more