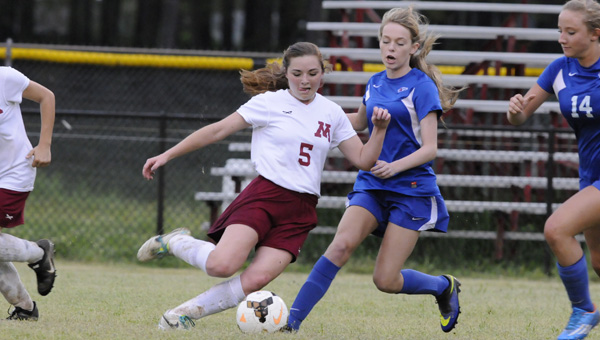 Morgan Academy’s Lauren Rutherford attempts to get possession of the ball from a Macon East player in Friday night’s regular season finale. The Senators lost 6-4 but will play the Knights again on Tuesday in the first round of the AISA state playoffs.–Daniel Evans

Morgan Academy and Macon East finished off their regular seasons Friday night by getting acquainted, because the teams are going to be seeing a lot more of each other next week in the AISA soccer playoffs.

The Knights beat the Senators 6-4 Friday in each team’s regular season finale and the final home game for Morgan’s lone senior, Lauren Rutherford, who petitioned to get the soccer program started for the Senators four years ago.

The game didn’t mean anything for playoff positioning, with the Senators and Knights already set to meet in the playoffs Tuesday night. Knowing the game didn’t mean much, Morgan head coach Stephen Rutherford chose to start his second string to give Macon East a slightly different look than they’ll see Tuesday.

“I didn’t want to give up too much to Macon East and didn’t want to let them know what my first string could do. In order to get the playoffs, we needed the first string to win some games for us so [the second string] didn’t get much playing time,” Stephen said. “I might need them in the playoffs so I figured I better give them some playing time.”

Morgan got behind early without their starters on the field and trailed 5-2 at the break.

“I told them to just keep the score close and we’ll just try to let the first string make up the points,” Rutherford said.

Well, the Senators almost did.

Lauren Rutherford scored twice, with the second coming on a high arcing shot that somehow found the back of the goal to bring the Senators within 6-3 late in the second half. Taylor Ellis scored next, bringing Morgan within 6-4, but the Senators were unable to get any closer before time was called.

Stephen Rutherford said his team didn’t show a lot, including a couple of plays he kept in his back pocket, but he thinks Macon East gave a couple of things away that the Senators can use for next week’s playoff game.

“I really think they showed what they’ve got,” Stephen said. “We know they have [Kelsey Granger] and [Rai Pritchett] and they have [Meagan Manley] on their left wing position so we know those are their key players. We will probably talk about that this week and talk about how to defend them.”

Morgan Academy will play at Macon East on Tuesday at 5 p.m.

When Morgan Academy’s Samir Freij scored on a penalty kick late in the first half of Thursday night’s game against Macon East, it looked like the Senators would have a real chance to pull off a big upset on senior night.

However, the Knights had other plans, scoring four goals in the second half in route to a 6-1 win that showed why they are one of the favorites to win a state championship this season.

“We got beat by superior skill in the second half,” Morgan head coach Jay Minter said. “We made a couple of mistakes that were not necessarily huge mistakes against a weaker team, but they were mistakes a good team is able to capitalize on.”

The defeat, as lopsided as it was, was a common loss for the Senators a few years ago. This season, behind seniors Freij, Alston Ivey and Harrison Watters, the Senators are in the postseason and are no longer an easy win for opposing teams. Minter credits his three seniors for a lot of the team’s success.

“They led us in fighting and playing with our hearts before anything else,” Minter said of his seniors. “We aren’t as skilled as some of the other teams we play, but we are 6-7 because we play with our hearts.”

Macon East jumped out to a quick 2-0 lead, thanks to two early goals by Jem Stubblefield. The Senators kept it close the remainder of the first half, with goalkeeper Rance Morgan making a couple of tremendous stops to keep his team without striking distance.

Late in the half, Freij was awarded a penalty kick after a collision near the net. He kicked the ball past the keeper after a move that sent the goalie left while the ball went left to bring the Senators within 2-1.

The Knights put it away in the second half, with Stubblefield adding his third goal of the game. The Senators will play at Glenwood Academy on Tuesday at 5 p.m. in the first round of the AISA state playoffs.

Following Thursday’s Selma High School Invitational track and field meet, each team had a general idea of how they had... read more