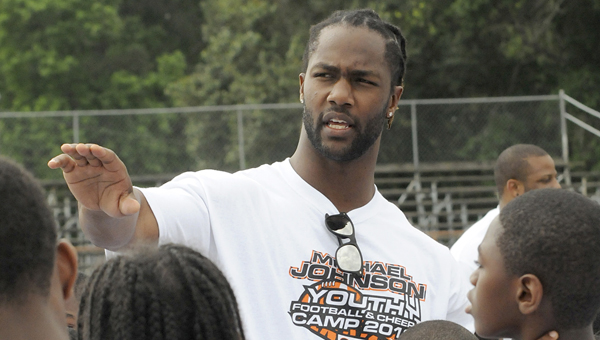 Guess who’s back: NFL Star Michael Johnson will return to Selma for a football and cheer campy in late April. (File Photo | Times-Journal)

Dallas County alumnus and NFL star Michael Johnson will return to Selma in late April for the fifth annual Youth Football and Cheer Camp, but this year he’s bringing some celebrity friends with him.

During the new Fun Fest with the NFL — which will take place from 4 p.m. to 9 p.m. on April 25 — Johnson will be accompanied by several superstars during the football and cheer camps the following day.

Friday’s Fun Fest event will feature games and food as well as a celebrity meet greet with the athletes and television stars.

Children participating in the football camp on April 26 will learn first-hand lessons about the basics of the game from both Johnson and McDonald.

Entry fee for Fun Fest is a $2 donation to Johnson’s MJ93 Foundation.

Thomasene Johnson, Johnson’s mother, said the new faces and activities would make this year’s event a memorable one.

“Its quite a feat for this event to make it to make it to the fifth year, and we are always trying to find ways to make it bigger and better than before,” Thomasene said. “I think the special guests and everything going on Friday will make this a really special event for everybody that can take part.”

Michael’s publicist, Trea Davenport, said there are likely to be additional celebrities added to the guest list in the coming weeks.

“Michael told me he wants to bring more than sports to Selma,” Davenport said. “He wants to give the youth of Selma a broader perspective of things they can accomplish outside of playing sports.”

The deadline to register for the football and cheer camps is April 24.

Registration forms for the football and cheer camps are available at MJ93.org, and also in Selma at the Lily Pad, Selma-Dallas County YMCA, Calhoun Foods and several area schools.

Selmian finds her match on MTV

All smiles: Dillan Ostrom, left, and Coleysia Chestnut, right, smile during MTV’s “Are You the One” reunion show. (Photo courtesy... read more