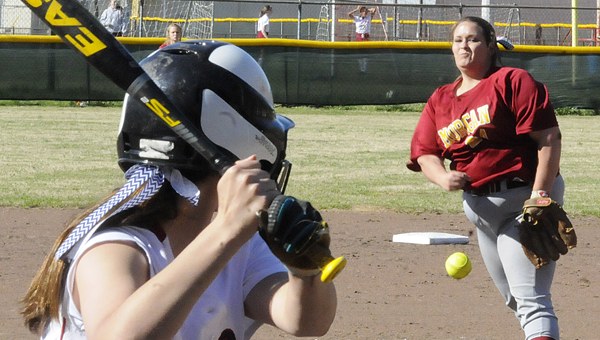 Mims kept the Eagles batters on their toes, consistently throwing strikes and getting help from her defense when Fort Dale did make contact.

“She has given up three runs one time [this year] and the rest of it has been two runs or less, so she is pitching fantastic,” Morgan head coach Ed Miller said. “Curve ball, drop ball, everything has been working well.”

The Senators’ offense was good enough to give Mims a lead to work with. In the bottom of the fourth, Jordan Averitte hit a sharply hit ball down the third base line to score Haley Bone.

In the top of the fifth, Morgan shortstop Kendall Veach ran under a ball that threatened to drop in the infield, ending the inning with a runner on base for the Eagles.

The Senators built on their lead in the fifth and sixth inning.

Jeni Redd singled to left field to score Anna Gail Hubbard. Cassidy Lawrence scored on a passed ball minutes later to give the Senators a 3-0 after five.

Hubbard doubled in the seventh to score Averitte and Maggie Jackson, giving the Senators a 5-0 lead.

From there Mims shut the door, keeping Fort Dale off the board and clinching a huge win for Morgan.

“That was big for us because the next game is Monroe when we come back from spring holidays and if we win those two we are automatically in the state,” Miller said. “We drew a bye in the region (tournament) and that gave us a bye in the state and if we split with them we have to play a one game playoff.”

The Senators have trouble hitting slow pitching, which is a riddle Miller hasn’t been able to solve just yet.

“We have trouble hitting slow pitching,“ Miller said. “We knew what was coming and we can hit fast pitching real well — our technique is great — it’s just we won’t wait on it.”

Hubbard didn’t seem to have much of an issue, leading the Senators’ offense with a 3-for-3 performance.

“She has done a great job. She has got great bat speed and she snaps with her wrists real well,” Miller said of Hubbard.

Morgan Academy will play in the Monroe Tournament Friday and Saturday. The Senators will then take a week off for Spring break before their game with Monroe.