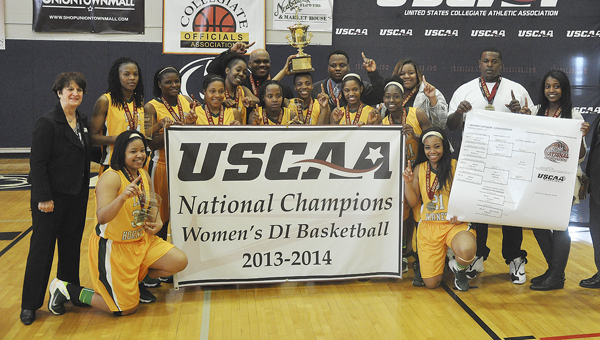 UNIONTOWN, PA. — For the fourth time in the last eight seasons, the Concordia College Alabama Lady Hornets are the USCAA Division I women’s basketball national champions.

“It hasn’t really hit me yet to be honest, but I’m just looking at my girl’s faces and they are all happy,” Jackson said. “That’s good enough for me right now. I’m sure in a couple of hours or maybe a day or two it may hit me what we accomplished.”

Jackson said it was never about his team’s seed in the tournament. Instead of zeroing in on an underdog role, he told his players to focus on winning three games — the total needed to win the championship.

“We have been nothing more than a seven seed in all of our playoff appearances,” Jackson said. “Matter of fact we have already created a culture where that doesn’t mean anything. More times than not the 1-7 seeds they haven’t seen us. They haven’t even seen Concordia basketball yet.”

The Eagles, like all of the other teams in the women’s field, had not played Concordia this season.

Despite being the No. 3 seed in the tournament, Robert Morris had not played Concordia this season and struggled with the Hornets’ defense. Concordia held the Eagles to 35.4 percent shooting and forced 16 turnovers in the game.

With the game tied 51-51 in the second half, tournament MVP Tykeria Johnson took control of the game. Johnson scored the next nine Hornets’ points and gave Concordia a 60-53 lead with 4:50 left to play in the game.

From there, Concordia held on by only allowing the Eagles to make two field goals the rest of the way.

The game was clearly a tale of two halves. In the first half, Robert Morris controlled the action and led 17-11 after a Tracy Osby layup at the 10:40 mark.

“We focused on what we were trying to do,” Jackson said. “You are going to have jitters at the beginning of the game. That’s not surprising. In the second half we kind of settled down and focused on what got us here — our defense.”

Concordia answered with a 9-0 run to close the half, allowing the Hornets to take a 32-27 advantage into halftime.

The Eagles chipped away in the second half before ultimately tying the game 51-51 on a Cassandra Baker three-point shot, but the Hornets responded with their own run.

Johnson made back-to-back layups and nailed a three-pointer to quickly keep Robert Morris at bay and the Hornets led from that point on.

Johnson had 29 points and 12 rebounds for Concordia and Lashay Lettingham scored 17 points and brought in 17 rebounds.

Concordia out-rebounded the Eagles 50-46 and also only turned the ball over 11 times.