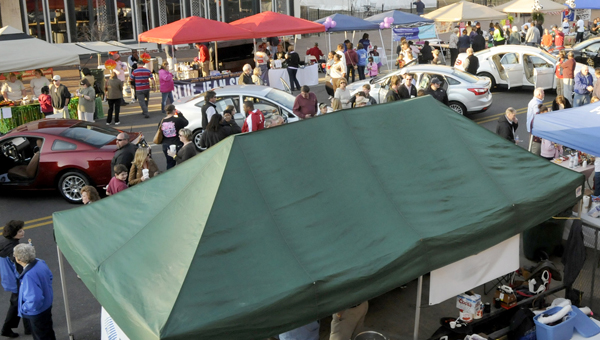 A total of 45 teams are preparing to showcase their best chili to thousands of visitors Thursday, March 13 on historic Water Avenue.

Members of the annual Alabama River Chili Cookoff met Wednesday at Trustmark to finalize plans for what will be the largest cookoff to date. This marks the third year for the event, which was started as a community project by Leadership Selma-Dallas County Class XVIII.

“It kind of makes you feel good that our 12-member team can come together and get things done,” event co-coordinator Leslie Free said.

The chili teams create will be judged with the goal of winning “Best Judged Chili.” This year, first place in that category comes with a  $500 prize. Teams are also competing for “Fan Favorite Chili,” which is decided through visitor vote and the “Most Spirited Team Award,” determined by organizing officials.

Proceeds from this year’s charitable event will go to support the Cahaba Center for Mental Health.

The growth in community involvement has made the planning process stressful but rewarding for the organizers, Free said.

Lafon Barlow, the executive director of the Cahaba Center of Mental Health, said she appreciates the support from the Leadership Selma-Dallas County Class XVIII and the community.

“The timing is unbelievable with the state funding, general fund shrinking like it is,” Barlow said. “It’s good to know people really do care about people who have mental illness who live here.”

The event raised more than $11,000 for area charities in the last two years, with the proceeds coming from sponsorships and ticket sales.

“It’s encouraging to know too that the people in the community are willing to come together and come downtown for an event,” Mark Frasier, a Leadership Selma-Dallas County Class XVIII member, said.

Gates open at $5 p.m. with the awards being announced at 7 p.m. Admission to the event is $5 for those ages 9 and older.

For more information and updates on the Alabama River Chili Cookoff, search Facebook or contact Free at 878-4543.

Payne Elementary students walk the school hallways representing Dr. Seuss characters as a part of their Read Across America and... read more