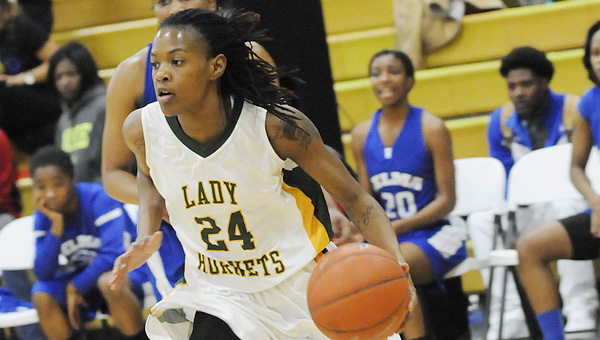 Concordia College Alabama’s Lashay Lettingham drives to the basket in a game earlier this season against Selma University. The Lady Hornets are the No. 8 seed in the USCAA women’s basketball
tournament, which begins March 5 in Uniontown, Pa.–Daniel Evans

For the first time, the USCAA national championship basketball tournament will include both the Concordia College Alabama men’s and women’s basketball teams.

The tournaments, which will take place in Uniontown, Pa. at Penn State Fayette beginning March 5, almost didn’t include either Hornets team.

Both teams were given their tournament’s No. 8 seed, which designates them as the final team into the field.

“To be honest there really is no difference between No. 1 and No. 8,” Concordia men’s coach Fredrick Summers said. ”That is just the seeding from the coaches’ poll. The way I look at it is everybody has to beat somebody.”

Summers said “the pressure is on everybody” in the tournament and that the Hornets will not go in playing the underdog role. Instead, he said his team has been focused on winning a national championship all season and now it’s time to work to accomplish that goal.

Since the top eight teams have been fairly clear for a while, Summers said he has already been scouting teams that the Hornets might face next week.

Top-seeded Daemen College (20-6) figures to be a stern test for the Hornets (16-15), who are playing in their first USCAA championship tournament since 2004.

“Daemen is a team that plays hard,” Summers said. “They are young but they play hard and they have a strong inside presence. They have got two pretty good guards that can shoot the ball. We’ve got our work cut out for us, to be honest, but I think they have their work cut out for them as well.”

While the Concordia men have never won a USCAA national championship, the Hornets women will be in search of their second championship since 2011. Eric Jackson, head coach of the Lady Hornets, said his team was very excited when it saw the selection video and knew it had received a bid.

“They were relieved and excited but about five minutes after that it sunk it that it was time to really, really work,” Jackson said. “We’ve been talking about how our effort got us this far but our goal is not completed. We’ve got to take it to the next level. We’ve got to figure out what makes us different from the other seven teams.”

What may differentiate the Hornets from other teams is their experience, because three players who were on the Concordia championship team from 2011 return for a shot at a second title.

Dallas County’s William Lee isn’t the only Hornets’ big man that has been recruited by schools all over the country.... read more