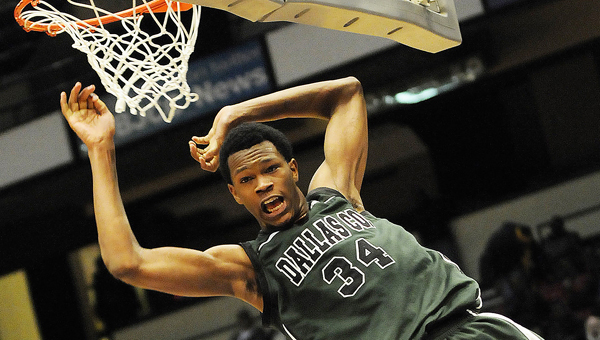 Dallas County’s William Lee finishes off a dunk in the second half of Wednesday’s Class 4A state semifinal game in Birmingham. The Hornets advanced to Saturday’s state championship game after defeating Madison County 53-52 in overtime. — Daniel Evans

BIRMINGHAM — With its season hanging in the balance, Dallas County (29-3) knew it needed to dig down and get one more defensive stop or defending champion Madison County (24-6) was going to end the Hornets’ season in the Class 4A semifinals at the BJCC.

“Get one more stop, make one more play, get one more deflection, get one more turnover,” Dallas County head coach Willie Moore said he kept telling his team during Wednesday night’s game.

The Hornets did, hanging on for a 53-52 overtime win over the Tigers and advancing to the Class 4A state championship game against J. O. Johnson Saturday at 11 a.m.

The Tigers had a final chance to steal the win after Dallas County’s Jerrod Moorer missed two free throws with 7.9 seconds left to play in overtime, but they were unable to even get a shot up due to Dallas County’s defense.

“At the end, I thought they were going to hit a three … and beat us like Dora did [last year], but they didn’t get a shot up,” Dallas County senior forward William Lee said. “But, we hung in there.”

Instead, the Hornets rushed the court, celebrating a trip to their first state championship game in school history.

“We were just hoping to get in the finals,” Moore said. “We didn’t talk about winning the state championship a lot this year but that was the ultimate goal.”

This one was anything but easy.

Dallas County led at halftime and extended its lead to 32-28 behind Lee’s 11 third quarter points. Lee, a senior, who was trying to extend his high school career as long as possible, scored every point for Dallas County in the third as part of his 25 point, 12 rebound performance.

“My teammates just got me the ball and I scored,” Lee said. “That simple.”

Despite Lee’s performance the Tigers refused to go away, even when it looked as if Dallas County might have put the game out of reach.

A 41-37 Hornets lead with 3:32 left in the fourth did not last long as Madison’s Tyrell Clary hit two free throws and Riley Webster hit a layup to tie the game with 1:30 left to play.

The Hornets turned the ball over on the inbounds and Clary was fouled on the steal. He hit two free throws to give Madison County the lead.

Moorer answered with a hard drive and layup and free throw to give the Hornets a 44-43 with 1:10 remaining. After Dallas County’s Raheem Phillips added another free throw minutes later and the Hornets got a defensive stop, it looked like Dallas County had put the game out of reach.

Instead, the Tigers trapped Phillips on the inbound and he turned it over and fouled Brandon Gurley with 8.4 seconds left. Gurley made both free throws to tie the game 45-45 and send it to overtime.

In overtime, Moorer gave the Hornets a quick lead with a hard drive to the basket and a layup. The Hornets led 49-45 after Lee knocked in two free throws, but Madison kept chipping away. A goaltending call on Lee and a couple a free throws by the Tigers cut the Hornets lead to 50-48.

Moorer, who was 5-for-13 at the free throw line, knocked in three out of his next four three throws to give the Hornets a 53-50 lead, but Madison’s Marquise Irvin scored and got fouled with 9.2 seconds left.

Irvin missed the free throw and Moorer was fouled.

When Moorer missed both of his attempts, Dallas County had to get one final stop and when the Hornets did the celebration started.

J.O. Johnson advanced to Saturday’s championship game earlier in the evening Wednesday, with a dominating win over Wilcox Central.