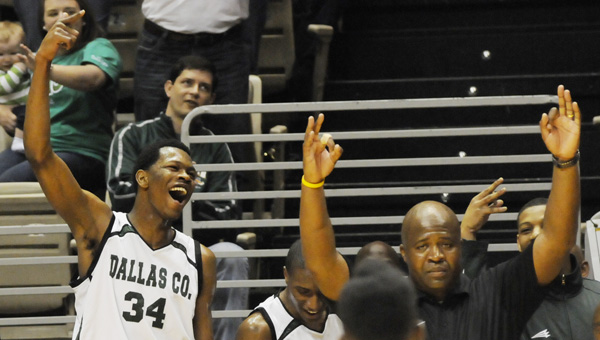 MONTGOMERY — The Dallas County Hornets are headed to Birmingham for the state final four after blowing out the Dora Bulldogs 53-32 to win the Central Regional championship Saturday morning.

The Hornets took a double-digit lead in the first quarter and led throughout on their march towards the school’s first ever state basketball championship.

“After over 20 years of coaching, to make it to this point with the team that we have this year, it is a great feeling,” Dallas County head coach Willie Moore said.

Dallas County power forward William Lee, who won the tournament MVP after a 19-point, seven rebound performance, had never made the final four after three consecutive trips to the Central Regional.

This time the Hornets got over the hump, beating a Dora team that knocked them out of the same regional tournament a year ago. The Bulldogs never led, but made a run in the final quarter to cut the Hornets’ lead to single digits. However, Dallas County’s Jerrod Moorer made sure the Bulldogs’ comeback hopes were short lived, slamming in two dunks that brought the Hornets’ portion of the crowd to its feet and extending Dallas County’s lead to 38-25.

Moorer, who made the all-tournament team after an 18-point performance, wasn’t done, driving to the basket for a three-point play minutes later to make Dallas County’s lead 43-25. Lee delivered the exclamation point, going up for a hard dunk through contact that pushed the Hornets lead to 46-25 with just over two minutes remaining.

All that was left from that point on was the celebration.

The Hornets said all week that they weren’t focusing on revenge after the Bulldogs hit a buzzer beater to knock them out of the state playoffs last season. Moore said this team is not his most talented, but it is the most composed he has had. Plus, it has Lee, who he said is the best player in the state.

“We don’t have the deepest team and we aren’t as athletic as we used to be, but we have the best player in the state on our team and nobody can tell me any different. Period,” Moore said.

The Hornets won the game by following their scouting report, Moore said, which focused on slowing down Dora’s Kenton Petties.

The game plan, which called for forcing other Bulldogs players to beat them, was effective. Petties scored only two points in the game and was 0-for-15 from the field.

“Our scouting report basically lend itself to that he is sort of the glue guy,” Moore said. “He handles the ball and sets everybody up and he can shoot the three and take it to the basket pretty good. We were pretty comfortable with our scouting report.”

The game started out with five quick points by Lee, including a three-point play on a hard drive to the goal. The Hornets led 15-5 after the first quarter and 19-8 at halftime, with Lee outscoring the Bulldogs 10-8 by himself in the first sixteen minutes of action.

Dallas County started to pull away in the third quarter after three-pointers by Jerrod Moorer and Jarvis McGuire gave the Hornets a lift. Dallas County took a 31-16 lead after three quarters.

In the final quarter, Dora threatened to get back into the game, cutting the score to 34-25 but Moorer and Lee put the game away with their three dunks.

Point guard Keyonis Phillips scored two points for the Hornets in the game, but Lee thought Phillips should have won the tournament MVP award for the way he controlled Dallas County’s offense.

Dallas County has made the state semifinals twice since 1971.

In the Hornets last appearance in 1990, Dallas County lost to East Limestone.