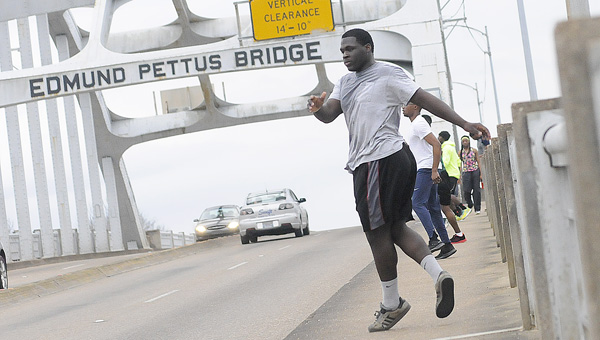 Over the last few weeks, motorists driving across the Edmund Pettus Bridge may have noticed Concordia College Alabama’s track and field team preparing for their season by running across the structure.

It isn’t a new exercise for the team, who has run the bridge since head coach Timeka Ross started the program in 2008, but it is a very tiring one. The students start at the school and run to the bridge, where they work on agility drills for around an hour before making the 1.5-mile jog back to school for classes.

“They hate it,” Ross said as she laughed.

“Let’s be honest, they don’t like it, but they see the results, especially for the incoming freshman athletes that are used to having high school tracks.”

With students in classes at times throughout the day, Ross has practice in the morning and at night. Since the Selma Parks and Recreation Department’s track closes before they can practice in the afternoon, Ross said the team takes advantage of Selma’s resources, which includes the bridge.

“[The city track] closes at 3:30 p.m. and that is when our second practice begins so I have to figure out innovative ways to get my team in shape for our track meets and track season,” Ross said. “We just use the resources Selma has and the bridge has been a pretty good delight since 2008.”

Ross said the school’s indoor track is made of concrete and carpet, which is bad on her team’s knees. Plus, the track is small, so it takes four laps around it to equate to one lap on a regular track.

The Hornets’ first track meet is the Adonica Ferguson Relays in Columbus, Ga. on March 1-2. Concordia had a track meet scheduled in Lexington, Va. to open its season, but that event was cancelled.