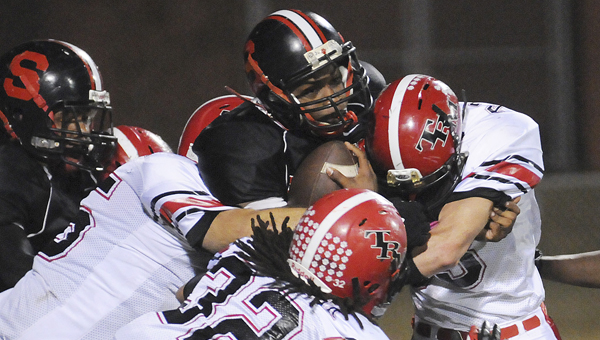 Southside will still log a lot of mileage on the road this season, but the Panthers do a get a couple of breaks. They no longer play at T. R. Miller. — File Photo

The wheels on the bus will go round and round a few less times for several area schools this upcoming football season, easing the cost of travel on their budgets.

Although Selma, Dallas County and Southside all moved up a classification under the new alignment the AHSAA announced last month, none of the five Selma-Dallas County schools saw its travel increase. In fact, most of the schools saw their total mileage go down.

Selma may be the biggest winner of all. The Saints will now play their road games in the Birmingham and Tuscaloosa areas, which is a big shift from trips to Mobile and seemingly everywhere else but close to home.

According to mileage numbers caculated using Mapquest, the Saints region opponents were an average of 104 miles away last season. This upcoming year the now 6A Saints will see that average drop to about 75 miles.

Last season the Saints took four trips to Mobile for region games and all of those trips required a charter bus because of the distance. It also meant the players had to be fed before and after the games. Miles estimated those four trips cost the school around $20,000 last season, which left the football program breaking even financially. This upcoming season he believes less travel will allow the program to come out in the black financially.

“Now, not having to travel that far, our fans and parents can come see their kids play and our fans can come see us play,” Miles said. “That’s a great thing.”

Another school that will benefit financially from the new regions is Dallas County, whose longest trip figures to be Sumter Central. Compared to the 2012-2014 classification that had the Hornets matched up with Beulah, Handley and Central of Clay County, the new region will ease the pressure of travel costs a little bit.

“We had the three long trips so we are definitely glad to not have to make those trips again so it will help us,” Dallas County head coach Barry Colburn said. “Every little bit you save will give you an opportunity to pursue something else.”

Last season, teams in Dallas County’s region were about 89 miles away. Now, the Hornets are in Class 5A, Region 4 and regional opponents are about 57 miles away from Dallas County High School.

Colburn estimates that it costs around $1.50 a mile for the Hornets to operate the school bus. He said this upcoming season the lessened travel costs will allow the Hornets to carry more players to games.

“Last year we didn’t travel a lot of our junior varsity guys with us and didn’t use them in the varsity games, which we are going to do this year,” Colburn said. “So instead of just carrying one bus for the varsity, we are going to be able to take two buses. That’s pretty significant.”

Other teams aren’t effected as much.

Southside, who will be a 4A school, saw the distance between it and other region opponents drop, but not significantly. Last season the Panthers were an average of 118 miles away from region opponents and this year that number is 112 miles, leaving Southside as the team with the most travel in Selma-Dallas County.

Keith’s region opponents are a little closer, with the Bears average dropping from 52 miles to 40 miles. Ellwood Christian’s average stayed right at 41 miles.

An additional thing that will help all local teams is an effort by the local schools to play one another in non-region play.

Almost all of the local schools have been able to create local rivalries, which will keep everyone closer to home.

There have only been a few exceptions, like Keith versus Dallas County, which were unable to find a week where both teams had a free slot available.

Mileage numbers were calculated by using the shortest possible route in terms of mileage recommended by Mapquest.