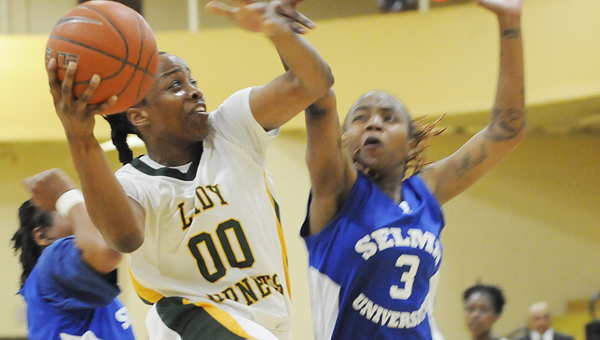 Concordia College Alabama’s Malaisha Chandler drives to the basket and prepares to shoot the ball in front of a defender from Selma University.

Tykeria Johnson made shots from all over the floor in the second half as the Concordia College Lady Hornets held on for a 72-63 win over county rival Selma University.

Johnson scored 32 points and hit four three-pointers in the second half to help the Lady Hornets fend off a comeback attempt by the stubborn Bulldogs, who refused to go away.

“She is just a coaches’ dream,” Concordia women’s basketball coach Eric Jackson said of Johnson. “She plays hard. My team is so unselfish that when a player is hot they are going to look for them.”

After leading 37-27 at halftime, Concordia quickly saw its lead shrink to 50-48 midway through the second half. Right on cue, Johnson picked up the slack scoring nine of the Hornets next eleven points on three-pointers to help her team grab a 61-50 lead.

“You have to play every possession like it’s the game winner,” Jackson said.

“When you do that, when you look at the scoreboard at the end you see it in your favor most of the time.”

Although the Bulldogs stayed close and cut the deficit in half, Selma never seriously threatened Concordia’s lead again.

“We kind of shot ourselves in the foot with some of the decisions we made on the offensive end,” Selma University head coach Ron Rembert said.

“We were able to cut it down at one point but we made some bad decisions that led to some easy points for them.”

For the Lady Hornets, this game held more weight than just the rivalry game.

Concordia is ranked No. 9 in the latest USCAA coaches poll and hopes to make the national championship tournament that will take place later this month.

This win will certainly help their cause.

“We are trying to make this playoff push and we are one spot out. I know one thing for sure: This didn’t hurt us,” Jackson said. “The only thing we can do is do our job and that’s keep winning.”