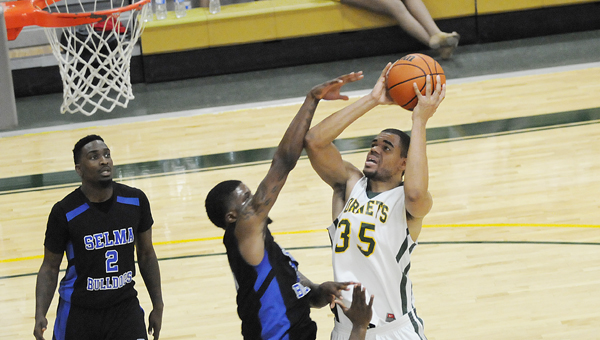 Concordia College Alabama’s Mark Heap shoots the ball over a Selma University defender in the Hornets’ victory over the Bulldogs. Heap scored six points in the game for the Hornets, who are ranked No. 5 in the latest USCAA coaches poll.–Daniel Evans

Although Concordia could not pull away from Selma University Wednesday night, the Hornets held on for a 75-70 win over their county rivals .

Concordia made just enough free throws in the last few minutes, enabling the Hornets to hang on for a big victory.

The game certainly had the feel of two huge rivals going at it, with some hard fouls and a lively crowd in attendance.

The game was also the Hornets first contest on their new look floor, which may have added a little bit to the intensity as well.

After Concordia controlled the action most of the first half — leading 38-31 at the break — the second half was a back and forth affair.

Selma University’s Jamie Washington had the hot hand early in the second half and when his three-pointer fell with 18:52 to play, the game was tied 38-38.

CCA’s Jeremy Sturdivant answered with a three-pointer and a layup. The Hornets quickly built back a 47-39 lead, but the Bulldogs refused to go away quietly. Washington hit a three, teammate Daniel Collins added another, and Washington drove for a layup to tie the game with 13:01 to play.

Selma’s Joshua Stallworth gave the Bulldogs a 52-50 lead with just under eleven minutes to play, but the Hornets battled back.

“Early in the second half we came out a little sluggish and relaxed and I tell the guys all the time when ball clubs do that, they get burned,” Summers said.

“Selma came out and knocked down some shots and got back in the game. We took a timeout to settle our guys down and talked about what we needed to do and we came out and executed.”

Concordia did settle down and after Taderius Neely hit a deep jumper with 8:59 to play, the Hornets had the lead for good. A three-pointer by Charles White and a layup by Henrique Cistrunk gave the Hornets a 63-56 lead with 4:58 remaining.

From there, the game was a free throw battle. Concordia made just enough to hang on, as Selma was unable to cut the deficit below three the rest of the way.

“It is a huge win for us because we are sitting No. 5 in the rankings and we are trying to continue moving up,” Summers said. “Any loss will hurt you at this point.”

The win certainly helps Concordia’s push to get into the national championship tournament. The Hornets are ranked No. 5 in the latest USCAA coaches’ poll.

Charles White led the Hornets in scoring with 21 points in the game. Washington scored 28 points for the Bulldogs in the defeat.

Concordia College Alabama’s Malaisha Chandler drives to the basket and prepares to shoot the ball in front of a defender... read more