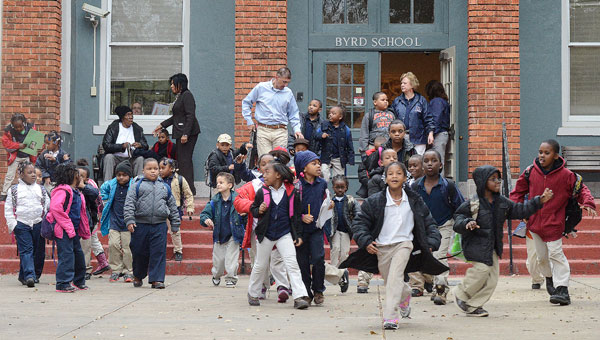 Students and teachers file through the front doors of Byrd Elementary School in Selma Monday afternoon. The Alabama State Board of Education is poised to vote on a measure that could lead to the state taking control of the Selma City School System. (Jay Sowers | Times-Journal)

According to the state board resolution, the Selma City School Board will be afforded an opportunity to demonstrate why such action is not warranted and should not be approved Wednesday at the Alabama State Department of Education’s board meeting held in Montgomery.

The resolution referencing the state board intervention, introduced by State Superintendent of Education Dr. Tommy Bice in January, cited the late submission of a corrective action plan as one of the reasons for state takeover.

The plan was in response to a scathing state investigation of the Selma City School System that was revealed last fall.

The investigation lead to findings that the Selma City Schools system failed to adequately investigate allegations of inappropriate sexual behavior, failed to enforce policies regarding graduation requirements regarding standardized testing procedures and has a disregard for instructional time.

According to the resolution, the corrective action plan also failed to include several necessary components.

“As I look at assessment and test scores for all levels of Selma City, I am disturbed, because I believe that our children are to be doing so much better,” Bell said.

Like Bell, fellow state board member Yvette Richardson said she has not determined if she will vote in favor or against a state intervention of Selma City Schools. Richardson said she doesn’t want to judge the situation before hearing an explanation from Selma school leaders about how they will correct the situation without the state’s assistance.

“I feel there has been an attempt to handle the situation, but there are still a number of questions, from my stand point knowing that I’ve been a superintendent, that I feel were not maybe understood by those persons in charge,” Richardson said. “Therefore I don’t want to be quick to judge, because I’m hoping that it will be evident tomorrow as to why they have done what they have done.”

Richardson shared her thoughts on how the Selma board can convince the state board that an intervention is not needed.

She said putting all administrators guilty of violating federal and state violations on administrative leave, at the least, along with other steps are some things that the local board can mention that would possibly put her at ease.

“Making it known that if there were young people involved, that their parents were made aware that this will not occur again,” Richardson said. “The second thing in reference to the plan is to have a definitive timeline as to when certain things will occur, so we as a state board will be aware of definitive steps that the Selma Board will take in order to make the school system one of a better quality.”

The state board meeting is scheduled to begin at 1 p.m. Wednesday, but any discussion on Selma is expected to come late in the meeting during Bice’s report to the state board.

Tow truck operator Buster Zuelke walks toward his truck Monday morning while pulling a Honda Civic from the basin at... read more