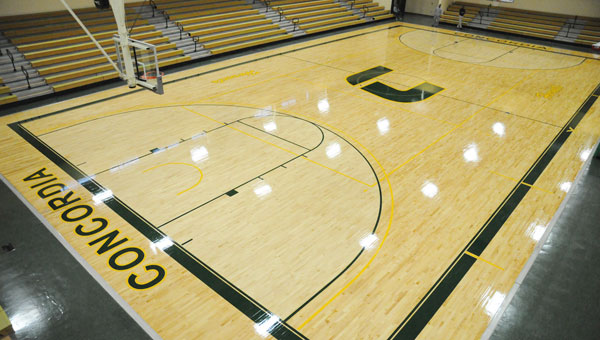 Concordia College’s remodeled basketball floor has a brand new look, with a green outline and the college’s new athletics logo in the center of the court. The Hornets will play their first game on the floor Wednesday against Selma University. (Daniel Evans | times-Journal)

The remodeling project of Concordia College Alabama’s new basketball floor is complete and now players are dying to play their first contest on the remodeled hardwood.

It’s hard to blame them.

The previous design was outlined in a bright yellow that had probably outlived its days and mid court featured the college’s old athletics logo, which was a light green and bright yellow Hornet. The remodeled basketball floor has a dark green outline and the new athletics logo, a green “C” at mid-court for a sharper, cleaner overall look and players are ready to play their first contest on it.

“They are blown away. They were like kids in a candy store,” Concordia men’s basketball coach Fredrick Summers said when asked about his players’ reaction to the new design. “They couldn’t believe it.

Most importantly, Summers is a huge fan of the new look too. He had high expectations going into the remodel, but he said even he didn’t expect it to look this good.

The project was completed by AGF Incorporated out of Birmingham. Summers said the company did a fantastic job and even worked weekend days to make up for work days Mother Nature took away with the snow storm in late January.

Since Monday’s game with Morris College was cancelled, the Hornets first game on the new look floor will be against county rival Selma University Feb. 12.

“It is kind of only fitting that they get to open up the new floor against their rival,” Jackson said.

Like Summers, Jackson was very impressed when he saw the new floor for the first time.

“It actually looks classy. It is just a mass improvement overall. It looks like an actual college floor.”

While the women’s team is also ranked in the USCAA polls, it’s the men’s team that continues to make history.

Concordia’s men’s basketball team is ranked No. 5 in the latest USCAA Coaches Poll, the highest ranking in school history.

One of the Hornets’ losses this season came to Selma University Dec. 17 and Concordia will be looking for a little revenge on its new floor.

The women’s game between Selma University and Concordia will start at 6 p.m., followed by the men’s game at 8 p.m.