Missionaries help refresh and revive the look of Selma museum 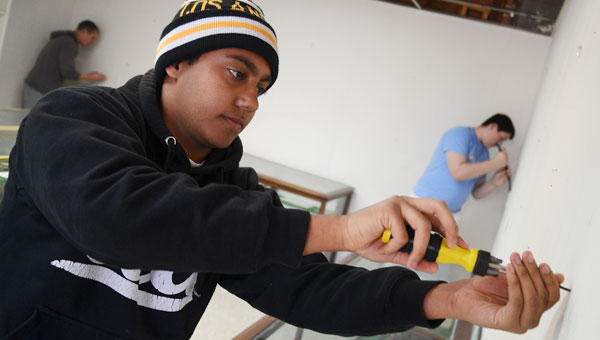 Elder Troy Sariah uses a crowbar to remove a sheet of paneling from a wall inside the Old Depot Museum on Thursday morning. Sariah and several other missionaries from The Church of Jesus Christ of Latter Day Saints have volunteered their time multiple times over the past 6 months to help Museum Director Beth Spivey expose the structure’s original brick walls. (Jay Sowers | Times-Journal)

Big changes are easy to spot at Selma’s historic Old Depot Museum, and museum director Beth Spivey will be quick to tell you she couldn’t have done it all by herself.

Thursday morning offered a prime example of the help Spivey’s relied on over her first year in charge of the museum, as several missionaries from the Church of Jesus Christ of Latter Saints were on hand to offer their assistance.

Spivey said the group has helped her numerous times over the past six months, and Thursday, they helped her remove wall paneling from one first-floor room in order to expose the structure’s original brick walls.

“It’s going to be used as a Civil War room,” Spivey said. “And hopefully, when we take these panels off, I can use the old brick window frames that have been hidden for so long as display cases for the guns and the money and take the old glass cases out of the center of the room.”

Elder Tyler Lebaron, who is from Chihuahua, Mexico, said such acts are common for missionaries in his church.

“Community service is a huge part of what we are all about, and we are always looking for ways to help out around the towns where we are,” Lebaron said. “Selma is a really historical place and to be able to help them preserve their history, it’s really great to be a part of that.”

Spivey said she was skeptical about the missionaries when she was first approached by a group of missionaries six months ago, but said her previous doubts have been proven to be unfounded.

“I’ve asked them what’s the catch, and they say there is no catch,” Spivey said. “I don’t have to pay them, they don’t try to make me a Mormon. They are just kind and hardworking and they just want to help.”

Elder Chris Anthony Collins, who is from Jamaica, moved to Selma three months ago, and said it has been an honor for him to help preserve the rich history the museum has on display.

“When I got to the museum, I just thought it was so awesome because back home I don’t see this kind of stuff, and you don’t hear about this kind of stuff. This is history, and I like history,” Collins said. “When I look around and see stuff about slavery, and in Jamaica, they had slavery also, so it kind of connects where I am to where I am from.”

Collins said the experience he’s had working in the museum has made his stay in Selma, which could end very soon, all the more enjoyable.

“Every six weeks, we have what are called transfers where there is a chance you will go somewhere else in Alabama. There are about 300 missions in Alabama, and they move them around, and there is another one coming up in about three weeks” Collins said. “I want to do a little bit of everywhere, but I really like it here, so I hope I can stay.”

Spivey said the work the missionaries helped her with would improve the appearance of the room, as well as the experience for visitors to the museum.

“It’s going to be wonderful,” Spivey said. “Nobody has said they missed the old paneling and the drop ceilings. It was kind of atrocious. But, it’s wonderful how much they’ve helped and they know it.”

Dallas County power forward William Lee played in his first game in over two weeks in the Hornets’ win over... read more