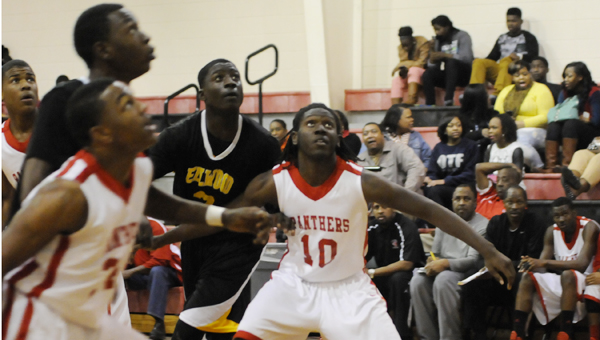 Following a controversial call, Jevon Hall made two free throws with under a minute to play Friday as Southside rallied past Ellwood Christian 62-59.

The Eagles did not believe Hall was the player fouled on the play and Ellwood head coach Steven Hendrieth pleaded with referees, believing that Kentavius Page should have been the Panther shooting free throws. But Hendrieth said the call is not what cost his team the game.

“That’s the referees’ fault for letting that happen, but that wasn’t the reason we lost the game,” Hendrieth said. “Free throws, careless turnovers and foul trouble [cost us].”

Nevertheless, it was Hall who went to the line and hit two free throws to complete his 26-point night and give Southside a late lead.

“To my knowledge, [Hall] was fouled during the shot,” Southside head coach Cedric Brown said. “It’s not my position to put the man on the line. I think [Hall] was [fouled] and he thought he was.”

On Ellwood Christian’s ensuing possession, the Panthers came up with a steal and Page hit a layup to make the score 62-59 with :07 left to play. The Eagles had one more chance to tie it, but Jalen Furlow’s three-point attempt came up short.

“This is a game we really needed, especially at home late in the season,” Brown said. “We need that momentum going into the playoffs.”

For Ellwood Christian, it was another close loss in a season full of them.

“I don’t know if it is the pressure or if maybe the pace of the game changes everything up,” Hendrieth said when asked about what change’s for his team late in games.

Ellwood seemed to control the lead the majority of the contest. During the few instances the Eagles did trail, it was only by one point.

The Eagles led 56-52 with 4:55 remaining in the fourth quarter, but Southside stormed back to tie the game at 59-59 when Devonte Alexander banked in a turnaround jumpshot with 1:58 remaining.

On Ellwood’s next possession, the Eagles turned the ball over and Southside was able to draw a foul. Although it appeared Page was the player shooting when the foul was called, Hall was the player that shot the free throws.

The Southside Lady Panthers easily pulled away from the Ellwood Christian Lady Eagles Friday in a 55-22 victory.

The Panthers led 34-15 at halftime and never looked back. Southside’s Kiona Page led the way with 13 points.

“Overall I was just happy we could get back into a rhythm because we hadn’t actually been on the floor as a team since Monday,” Southside head coach Jason Bothwell said. “Not using the weather as an excuse, but overall we had some plusses and we had some minuses.Overall I was just glad we could get into a rhythm and do the things that we know how to do.”

Dallas County power forward William Lee played in his first game in over two weeks in the Hornets’ win over... read more