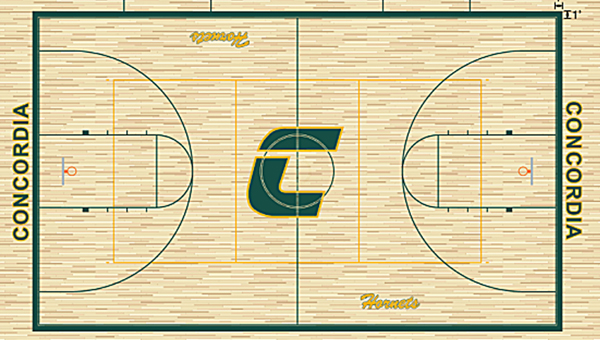 Concordia College Alabama’s new basketball floor will feature a green trim and the
Hornets new “C” logo at mid court. Inside the three-point line will be a darker paint, although that is not shown on the design above. –Submitted Photo

Concordia College Alabama men’s basketball team has the highest ranking in school history and now the Hornets will be playing on a basketball court with a fresh, new appearance.

The college’s basketball court is getting completely remodeled and when it is finished, it will have a brand new look. The yellow that outlined the floor will be replaced by a more basic appearance, highlighted by a green trim and the Hornets new “C” logo at mid court. Inside the three-point lines will also be a darker paint than the color covering the rest of the court.

“It will definitely help the appearance of the gymnasium and it will help with recruiting,” Concordia men’s basketball coach Fredrick Summers said. “It is something that was much needed. The floor in some areas was in bad shape and we are getting those situations rectified with the repair of the floor now.”

Summers is excited about the floor having a fresh new look, and his players might be even more excited.

“They are very excited. It is about time,” Summers said. “We walk into some other gymnasiums and gyms aren’t better than what we have here, and we know that our situation can be a little better with just a little bit of the small things getting done. We are on the right track now.”

Summers said throughout his career new things — such as new shoes or new uniforms — have sparked players and given them a little boost of adrenaline or momentum, and he believes the floor might be able to do the same thing for the Hornets.

If it does, Concordia could be tough to beat. The Hornets (17-10) are ranked No. 6 in the latest USCAA poll and have won seven of their last nine games.

The two losses in that stretch came to former No. 1  ranked Victory University and the NAIA’s Dalton State.

“We talked through the process of the preseason about making it to the national tournament and winning a championship,” Summers said. “We mention it sparingly throughout the season because with basketball you have to take it one game at a time.”

But Summers has warned his players that nothing is for certain.

“Everybody is excited because they see the No. 6 ranking but I keep constantly telling the guys that we still have business to take care of,” Summers said. “It’s not over until it is over. Once we take care of business, everything else will fall into place.”

The Hornets are full of young players and Summers is very proud of the way his team has played this season.

“We have a really good team,” he said. “These guys really truly enjoy playing together and sharing the basketball. I couldn’t have asked for a better ballclub.”

Concordia is hoping the new floor will be finished before the Hornets scheduled game with Selma University Feb. 4.

Summers said he would obviously like the floor to be done by then, but if it isn’t the game with the Bulldogs can be moved if it needs to be.

“I’m not that concerned. It is one ballgame. If we need to reschedule we will reschedule,” Summers said. “We are looking at the long term process.”

The Hornets finish their regular season by playing four of their last five games at home.

Concordia’s women’s basketball team still has three scheduled home games remaining where they will get a chance to play on the new floor. The Lady Hornets play Selma University Feb. 4 and then play Morris College and Rust College at home at the end of the month.

The Lady Hornets are 10-11 on the season and have won five of their last six games. They are ranked No. 12 in the USCAA women’s poll.