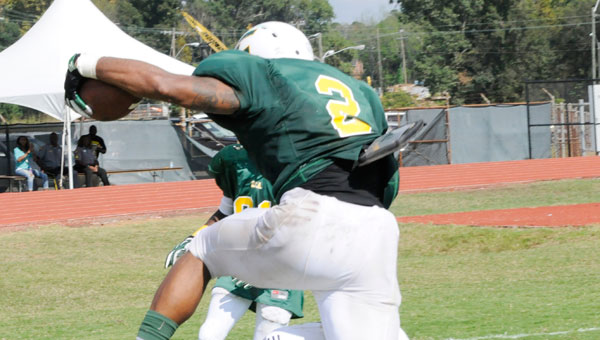 Concordia College Alabama running back Terrell Edwards-Maye dives into the end zone in the Hornets homecoming loss to Ave Marie earlier this season. Edwards-Maye played in the 2014 USA Football Bowl Monday, Jan. 20, starting at running back and on kickoff returns. (File Photo | Times-Journal)

For Concordia College Alabama’s Terrell Edwards Maye, last Monday’s USA Football Bowl was an opportunity to be seen by scouts and a chance to show he could play football at the next level.

The experience definitely didn’t hurt his cause.

Edwards-Maye and Hornets teammate David Hampton were on the winning Admirals team, which beat the Generals 37-13.

“Any opportunity you have as an athlete to showcase your talent, whether it is a game it is a college game, all-star game, combine or anything is always good,” Edwards-Maye said. “In a setting like that where you have CFL, NFL and AFL scouts and coaches that have played in the NFL that know people, it is all about making connections and networking.”

Edwards-Maye, a running back that transferred from Marshall University in 2011, started the game for the Admirals at tailback and kick returner. Although he didn’t get to return any kicks, he did get some touches in the ground game.

“I had a fair amount of carries and I was very satisfied with my performance,” he said. “I didn’t get in the end zone but I helped set up a couple of plays that eventually led to scoring plays and we won. It is always good to win whenever you are in a competition.”

Edwards-Maye said there was a lot of scouts there during the week, especially for the first practice. Now, he’s hoping that the game may lead to him playing football professionally.

“To be honest, I really don’t care what level it is because any level of competition where you are getting paid as long as I make a substantial amount of money to provide for myself and open up other doors and different avenues that I want to go for in my life I don’t have an issue with it at all.

“It doesn’t necessarily matter because you are playing football, you can always get looked at and progress.”

Edwards-Maye knows that at times a player has to work his way to the top.

“It doesn’t matter where you start,” he said. “It’s where you finish that counts.”