Two senior Senators have put up big numbers this season 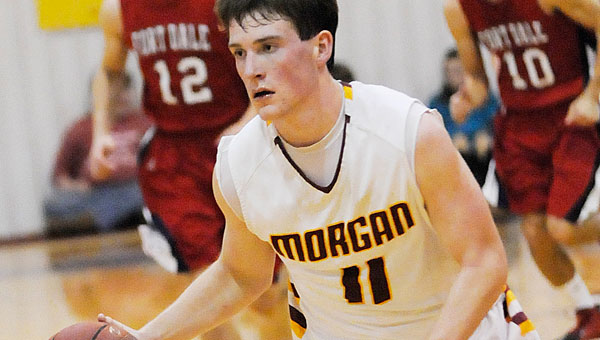 Connor Henderson dribbles the ball down the floor in the Senators’ loss to Fort Dale. (Daniel Evans | Times-Journal)

Dalton Lee and Connor Henderson played their final home game as Morgan Academy Senators Tuesday night and even though it ended in a loss on senior night, the duo has a lot to be proud of.

Lee and Henderson, two of the Senators’ leaders, have each accomplished a lot in their playing careers. Lee has scored over 1,100 points and is nearing 500 rebounds.

Henderson is over 900 points and could reach the 1000-point plateau if Morgan plays deep enough into the postseason. He’s also over 500 rebounds.

“These two guys have really played hard over the four years that I’ve had them,” Morgan Academy head coach Bob Taylor said. “They just got after it and played hard and they’ve been the leaders of our basketball team the last three or four years for us. They do everything well on the basketball floor.”

Henderson and Lee have been playing together since the first grade, along with teammates Trey Powe and Ford Manderson. Henderson and Lee even played on AAU teams together growing up and they’ve always been friends off the floor.

Both players credit their teammates and coaches for their success. After all, Morgan is one of the most experienced teams in the state with seven seniors.

Neither of the players say they had ever really thought about the numbers they were amassing because winning was the only thing they have cared about.

“I hadn’t ever really thought about it until this year really,” Henderson said. “Numbers were really never important to me.”

Henderson remembers shooting around with his dad, who he gives a lot of credit for his growth in basketball.

“My dad helped me a lot growing up,” Henderson said.

“It wasn’t until eighth or ninth grade that he would let me shoot a three-pointer. He helped me with my form on the weekends.”

Both agreed that it would be fun to look back one day down the road and think back at the numbers they have put up in their careers, but they aren’t quite done yet.

The Senators are 11-9 on the season and although their career playing at home is finished, their pursuit of a state championship continues.

“The goal is win to state and try our hardest,” Lee said.

Maybe with all of the experience they have the high scoring tandem can help lead the Senators to a state championship.

But whenever it all ends — whether it holding a championship trophy or not — it’s going to be a bittersweet feeling.

“We’ve been playing a long time together,” Lee said. “It means a lot. We’ve had some good times and I’m going to miss it.”