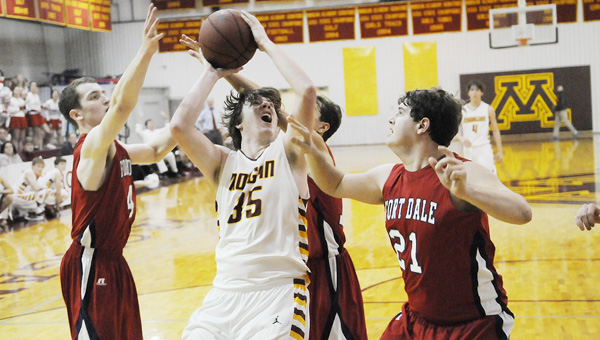 Morgan Academy senior Dalton Lee attempts a shot in the middle of three Fort Dale defenders in Tuesday night’s game. Lee scored 25 points to lead the Senators in the game. Morgan led the game by ten points with 1:58 remaining in regulation, only to see the Eagles come from behind to steal the game in double overtime.–Daniel Evans

Fort Dale stormed back from a late ten-point deficit in regulation to put a damper on senior night at Morgan Academy, shocking the Senators 75-73 in double overtime.

Morgan Academy seemed to have the game in hand after Trey Powe hit a three-pointer with 1:58 left in regulation to give the Senators a 58-48 lead, but Fort Dale refused to go away. The Eagles scored 15 points in the final two minutes of regulation, including a three-pointer by Ryan Burkett as time expired to send the game into overtime.

“Fort Dale did a tremendous job getting the ball down [the court],” Morgan head coach Bob Taylor said of the Eagles’ game tying shot. “They made a great play at the end of the game to get the play off and the kid hit a big shot. They forced some turnovers against us in the fourth quarter and we sort of lost what we were doing.”

From there, Fort Dale controlled the action in overtime. The Senators were able to overcome a five-point deficit to send the game to double overtime, but Fort Dale jumped out to a four-point lead in double overtime and then held on.

Morgan had a chance with a win to tie Fort Dale for first place in the area, but the loss elminiates the Senators from winning the regular season area title.

Mantooth said it was huge for the Eagles to jump into the lead in both overtime periods. Fort Dale did not trail in either overtime.

The Eagles led in overtime 69-64 and seemed prepared to ride the momentum of Barkett’s buzzer beating three to a easy win in the extra session, but that wasn’t the case. Dalton Lee hit a three-pointer with 1:49 left to pull the Senators within 69-67 and then after getting a stop, Connor Henderson made a layup to tie the game 69-69 and send it to double overtime.

The Eagles jumped out to a 72-69 lead, but Lee answered with a layup to cut the Fort Dale lead to one with 41.3 seconds left.

Down 73-71 with 28.5 seconds left in overtime, Lee was unable to make two free throws to tie the game.

Fort Dale’s Chip Taylor made one out of two attempts, leaving the door open for the Senators, but Henderson’s three-point attempt failed to go in and the Eagles got the rebound and made another free throw to put the game away.

The Senators led most of the game. Morgan took an early 17-9 lead in the second quarter, led 23-15 at halftime, and had a 40-34 advantage through three quarters.

The fourth quarter seemed like an afterthought after Morgan took a 12-point lead on a Lee layup, but missed free throws and turnovers down the stretch proved to be costly for the Senators.

Fort Dale’s Taylor made a layup with 19.0 seconds left to cut the score to 62-58. The Senators turned it over on their next possession and the Eagles’ Taylor Thomas scored a quick bucket on a layup. Henderson was fouled with 7.5 seconds left and made one of two free throws. After the miss, Fort Dale ran the perfect play — a rebound and two quick passes, setting up Burkett in the corner for a game tying three as regulation ended.

Lee led the Hornets with 25 points in the game.

Unfortunately for Morgan Academy, the game ended like all others this season: in defeat.

Morgan trailed 31-13 at halftime and could not inch its way back into the game.

“They played hard all season,” Morgan Academy head coach Jennifer Moore said. “They haven’t come out on the winning end but they have grown and they have grown together.”

Bears boys come from behind to defeat Ellwood

Keith rallied in the second half to come from behind in a 63-56 win over county rival Ellwood Christian. The... read more