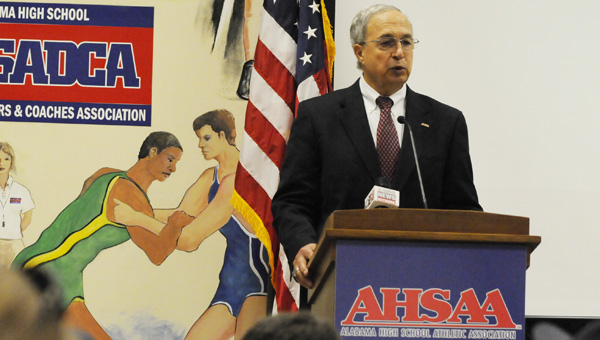 Selma, Southside and Dallas County were among the teams most affected by the Alabama High School Athletic Association’s reclassification announcement Wednesday morning.

The AHSAA unanimously approved adding a seventh classification for championship play and the trickle down affect of that decision affected every classification and indirectly vaulted the Saints, Panthers and Hornets up a class.

“We have over 100 more rounds of playoffs in our state,” AHSAA Executive Director Steve Savarese said of the decision. “Bands, cheerleaders, fans will get to go to contests and be in championship play that have never had the opportunity.”

Savarese said the main reason he loves the new 7A classification system is because more student athletes have a chance to play for a championship in the state of Alabama.

“It also will allow more schools to make the state playoffs and will crown more state champions than at any other time in the history of our organization,” Savarese said in a press release before the press conference.

Dallas County schools are going to see a lot of changes to their schedules, especially in football.

The Hornets, who were the largest 4A school after the last classification, moved up to 5A and will play in a completely different looking football region. Dallas County will participate in Class 5A, Region 4 with Calera, Central Tuscaloosa, Demopolis, Helena, Jemison, Sumter Central and Wilcox Central.

“It’s going to help us because the travel won’t be near as bad football wise as bad as it was the last two years, so we welcome that but it doesn’t change much because the competition level is good no matter which way you look at it,” Dallas County athletic director Willie Moore said.

Moore acknowledges that the Hornets’ football program has not had a lot of success in recent years but he said it’s a new beginning for Dallas County.

“At the end of the day it is an opportunity to get to play against some different teams that we haven’t played against in five or six years so it is a great opportunity for us to start anew playing against new teams against new programs from different parts of the state,” Moore said. “We are going to look at this thing from a glass half full.”

The changes don’t end with the Hornets.

“I’m excited about the new area and the new alignment and the new region and I think it is going to be a good one,” Selma head football coach Leroy Miles said.

Miles said since the Saints’ region only has seven teams, he excited about the opportunity of having four non-region games on Selma’s schedule.

“It will give us a chance to play some more teams in this area,” Miles said.

Southside has moved up to Class 4A and will play in region 4.

“With the 4A, we’ve been there before, so we kind of know what to expect,” Southside athletic director Cedric Brown said. “The level of competition doesn’t increase any going 4A. We will be playing some newer teams and travel wise it really didn’t change much.”

Keith and Ellwood Christian will remain in Class 1A and participate in region 4, which involves most of the same teams the Bears and Eagles currently face. A. L. Johnson, Akron, Linden, Maplesville and Sunshine all will participate in that region. The only change is that Autaugaville moved into region 3 and Linden moves in.

Basketball areas will also look different under the new classifications.

Moore admits the Hornets may face a tougher area than they do now under the old classifications. The Hornets will take on Demopolis, Sumter Central and Wilcox Central in Class 5A, Area 6.

The Saints will take on Hillcrest Tuscaloosa, Paul Bryant and Chilton County in Class 6A, Area 6.

Southside will play Thomasville, Clarke County and Monroe County in Class 4A, Area 6.

Unlike in football, Keith and Ellwood Christian will face a slightly different basketball region. The Bears and Eagles will take on Akron and Sunshine in Class 1A, Area 5.

The AHSAA also announced that an eleventh week will be added to the football season, allowing teams more scheduling flexibility to play their ten games each season.  Under the new rules, schools may elect to have a non-region game Aug.21-23 or play a jamboree game, which would not count against the school’s record.