Morgan boys, girls lose in first round of JV tournament 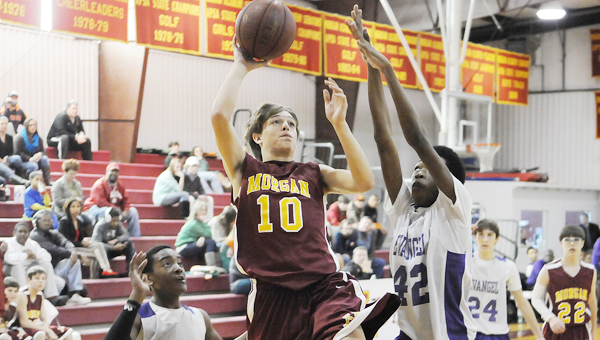 Morgan Academy’s Chase Utsey rises to shoot in the Senators opening round loss of the AISA junior varsity state championship tournament. Utsey and the Senators lost to Evangel 25-21 in a back and forth contest that saw the teams swap the lead multiple times.–Daniel Evans

Morgan Academy’s boys junior varsity fell to Evangel 25-21 in the first round of the AISA JV state championship Saturday morning.

The fifth-seeded Senators trailed 24-17 with over three minutes remaining in the fourth quarter but made one final push to tie the game. Chase Utsey drove to the basket for a layup in the final minutes that allowed Morgan to close the gap to 24-20, but that was as close as the Senators would get.

“When you get to this level, state tournament play you are going to play good basketball teams,” Morgan head coach Bob Taylor said. “We hit a shot here or there or don’t make a turnover here or there and that ballgame is different. It could have easily gone either way. Evangel has a great basketball team and we do too.”

Taylor was proud of his team’s effort, despite the loss.

Taylor said nerves may have gotten to his team in the final minutes of the game.

“I think the nerves played into it for both teams today,” Taylor said. “It is like it is for a varsity game in here today. The crowd was in it and that makes a big deal to the kids.”

The fourth-seeded Lady Senators fell behind 28-13 at halftime and were not able to recover in time.

“When you lose a game like that when it is a state championship tournament, I just try to tell them not to let one day be what they take away from an entire season worth of work,” Morgan girls coach Jennifer Moore said. “They’ve had a good season.”

The Lady Senators turned the ball over 27 times in the game and were only 3-of-13 from the free throw line. Moore said she had players get in foul trouble early, which messed up the Senators rotation.

“I just think the nerves got to them. They got in foul trouble early,” Moore said. “I had three players with foul trouble early in the second period and you have to bring them out so you can try to save them. It was just nerves. That’s all I can guess.”